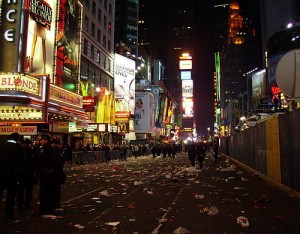 Last night was New Years’ Eve, which brings about the yearly revival of the song Auld Lang Syne.  Originally penned by Robert Burns (the melody is traditional), the lyrics are in the Scots language (or dialect, depending on your point of view).  The title roughly translates as ‘times long past’ or ‘old times gone’ or other combinations of ‘times,’ ‘old,’ and ‘past.’

Over the years, I’ve heard the same three questions asked about this tune:

1.)  Why do Americans sing a song in Scots at midnight? The reasons that the song spread are a bit sketchy, but it seems to have been popularized in America by Canadian bandleader Guy Lombardo, who played the song during New Years’ Eve radio shows.  That it is sung in a semi-obscure relative of English, then, is rather beside the point: Lombardo’s rendition of the tune was instrumental.

2.) Why do we translate most of the words of the song into standard English, but not the title?  This common misconception arises from the first stanza of the song, which is usually the only one anyone knows:

Why do we sing in English up until those last three words?

In fact, little is translated here from Burns’ original Scots. This is simply the stanza that most resembles Standard English. (I’d also point out that ‘Should old acquaintance be forgot’ isn’t Standard English to begin with). My guess is that not many New Years’ revelers in Times Square sing the words a few bars down:

We twa hae run about the braes,
and pu’d the gowans fine ;
But we’ve wander’d mony a weary fit,
sin auld lang syne.

There is one way in which Burns’ lyrics do get consistently altered, but it’s fairly minor: ‘For old Lang Syne, my dear’ is changed from the original ‘For auld Lang Syne, my jo’ (the last word is Scots for ‘sweetheart’).  There is a more complete translation that I’ve heard sung by choral groups and such, but the point is moot on New Years: I’ve never heard anyone sing past the first two verses at a party.

3.)  Why do Americans mispronounce ‘Auld Lang Syne?’ This is a bit more mysterious than the first two questions.  In Scots, ‘Auld Lang Syne’ is pronounced rather similarly to Standard English ‘old long sign’ (really [ɔld lɑŋ səɪn]). Most Americans I’ve heard singing the song, however, pronounce ‘lang’ so it rhymes with ‘rang,’ and pronounce ‘syne’ with a /z/ sound: this results in [old læŋ zaɪn] (or [old leɪŋ zaɪn], given that many Americans raise the /æ/ before ‘ng.’)

I can understand why ‘lang’ is pronounced the way it is (we don’t typically associate ‘a’ before ‘-ng’ with the broad-a in father), but the /z/ in ‘syne’ is odd.  This may simply be a matter of assimilation (the influence of a sound on one near it).  But we have little difficulty pronouncing the ‘s’ in ‘gang sign’ as an /s/.

So what’s with the /z/?  Simple assimilation, or something else?

Ben T. Smith launched his dialect fascination while working in theatre. He has worked as an actor, playwright, director, critic and dialect coach. Other passions include linguistics, urban development, philosophy and film.
View all posts by Ben →
This entry was posted in British English and tagged phonetics, scottish accents. Bookmark the permalink.