How People Think They Make Sounds 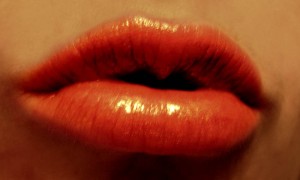 When I was younger, I believed I made the English /r/ sound with my lips.  When I visualized this consonant, I pictured myself making a tight half-pout.  I saw /r/, in essence, as a more emphatic version of/w/.

So it was something of a shock when I took an introductory voice and speech course in college.  My professor (and a prescriptivist speech textbook) taught me that the ‘correct’ way to produce /r/ is by moving the front of one’s tongue to the space behind the upper teeth.  Compounding my confusion was the fact that when I was younger, my /r/ was ‘bunched,’ meaning it involved the back of the tongue, not the front.

This anecdote highlights an interesting phenomenon I’ve noticed over the years: people sometimes have off-base perceptions of how they themselves produce the sounds of English. And I’ve noticed what seems to be a pattern. People are aware of movements they make with their lips, but are often unconscious of what they do with their tongue.

Take the /w/ sound. Most non-phonetician types probably assume (as I once assumed) that this sound is made entirely with the lips. The fact that ‘w’ involves tongue movement (lifting the back of the tongue to the soft palate), is something few people would be cognizant of.

The same is probably true of the ‘oo’ sound: many imagine this vowel being made by rounding the lips alone.  Tongue height, of course, is equally if not more important (and I might argue that in some dialects, lip roundedness is an afterthought).  Still, when most people think of ‘oo,’ they think of a pair of lips forming a perfect ‘o.’

So why do the lips seem more on people’s minds than the tongue? I’ve sometimes wonder if this is because the lips are more consistently visible: the first president Bush told the country to ‘Read my lips,’ not to ‘Read the interplay of gestures between my lips and tongue.’  We have a vague notion that the tongue is doing something back there in the darkness, but we’re not quite sure what.

These are obviously personal observations, and hardly universal.  But it does seem that humans assign conscious gestures to entirely unconscious activities, particularly when it comes to talking. Why do we notice some of the movements that create speech while ignoring others?

Ben T. Smith launched his dialect fascination while working in theatre. He has worked as an actor, playwright, director, critic and dialect coach. Other passions include linguistics, urban development, philosophy and film.
View all posts by Ben →
This entry was posted in Uncategorized. Bookmark the permalink.

9 Responses to How People Think They Make Sounds