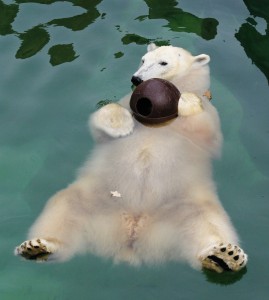 One of the handful of slips the excellent British actor Hugh Laurie made on House (he speaks with an American accent on the show) was when he had a line with the term ‘cross dresser.’  Every vowel and consonant was technically correct, but he noticeably pronounced ‘cross dresser‘ with stress on the second word; in American accents, the emphasis is usually on ‘cross.’

My impression is that in noun phrases with an adjective (I would also cite ‘polar bear’ and ‘spread eagle’), the British tend to put stress more often on the noun than Americans do.  Some may recall Will Ferrell poking fun at this feature in 1990’s Saturday Night Live episodes, playing a libidinous quasi-English professor who referred to a jacuzzi as a ‘hot tub.’

Conversely, this is not to say that British dialects always hit the noun.  You’ll notice in this news story that nobody refers to the ‘Christmas tree’ as a ‘Christmas tree‘ (fun bonus: the Northeastern English accent as :12):

As my Hugh Laurie example at the top suggests, this is a real challenge for actors doing dialect work.  I’ve never been able to find any hard or fast rules, nor any comprehensive list of these types of differences.  And this problem extends beyond British and American dialects.  There are nuances to the way Irish English treats word stress that I can’t quite fathom (and am hesitant to discuss, since it can be hard to separate prosodic features of Irish English from questions of stress).

Are there any ‘rules’ to noun phrase stress for different accents and dialects?

Ben T. Smith launched his dialect fascination while working in theatre. He has worked as an actor, playwright, director, critic and dialect coach. Other passions include linguistics, urban development, philosophy and film.
View all posts by Ben →
This entry was posted in English Phonetics and tagged phonetics, prosody. Bookmark the permalink.