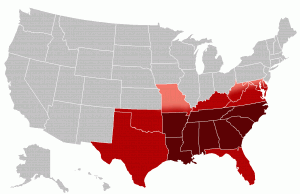 One of the most commonly held assumptions about American accents is one with arguably negative connotations.  That would be the pernicious rumor that Southern people speak ‘slower’ than Northerners.  I put this assumption in quotation marks, of course, because it is very likely untrue.

Let’s turn to a relevant study.  In Joshua Tauberer and Keelan Evanini’s Intrinsic vowel duration and the post-vocalic voicing effect: Some evidence from dialects of North American English*, they find the following (emphasis mine):

The mean speaking rates (determined by excluding ﬁlled pauses and only consider- ing utterances containing at least ﬁve words) for 445 Northern and 1,421 Southern speakers … are both 193 words per minute.

Well, that didn’t take long.  It seems that after analyzing a huge number of speakers, Northerners and Southerners exhibit the same rate of speech.  Case closed?

You may notice that the above study is about ‘vowel duration,’ which is relevant here: listeners may confuse the length of vowels with the speed of speech.  And in this respect, the researchers indeed notice a gap between Northern and Southern accents, with Southern ‘word-final’ vowels** lasting 159 milliseconds, far more than the duration for New Yorkers, at 133 milliseconds.

One of the salient features of Southern drawls and/or twangs, of course, is that they lengthen or draw-out vowel sounds, rendering them diphthongs or triphthongs.  So in strong Southern accents ‘trap’ might almost seem to rhyme with Northern American English ‘pay up’ (i.e. IPA [tɹæjəp]).

You might expect this to equate to slower talking, but my (hardly unique) impression is that Southerners don’t draw out every single vowel, just ones that are prominent and stressed.  Hence a recent call to a customer service representative from below the Mason-Dixon line yielded “My name is Paaaaaat.  How may I help you todaaaaaay?”  Actors imitating Southerners will often make the mistake of ‘drawling’ every vowel (‘Maaaah naaaame eeeeeuuuz Paaaaat’), when I’m assuming most Southerners only do this with stressed syllables.

So my guess is that people perceive Southern accents as slower simply because Southerners pronounce certain vowels slower.  Not very insightful, perhaps. But I’ve yet to find evidence that this impacts the actual rate of speech.

*A stressed vowel that appears at the end of a word: cat, attack, etc.

Ben T. Smith launched his dialect fascination while working in theatre. He has worked as an actor, playwright, director, critic and dialect coach. Other passions include linguistics, urban development, philosophy and film.
View all posts by Ben →
This entry was posted in American English and tagged American Southern Accents, phonetics, stigmatized accents. Bookmark the permalink.

15 Responses to Do Southerners Speak Slowly?