The Most Controversial Thing I Said on this Site 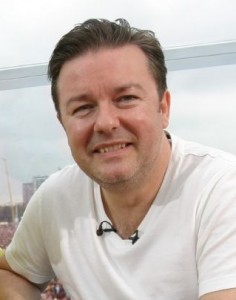 Writing about dialects (or anything language-related), it’s hard to avoid disagreement.  Yet of all the things I’ve said here, my most controversial statement, it seems, is something fairly trivial. That would be my assertion that comedian Ricky Gervais speaks with an Estuary accent.  I’d like to take a moment to clarify.

Estuary English refers to a type of British accent that is “Londonized” or “Cockneyfied.”  As I’ve said before, this “accent” barely has an accepted definition to begin with.  It’s sometimes described as a happy medium between Received Pronunciation and Cockney, but I don’t know if that hits the mark.  In fact, the only definition I can muster is hopelessly vague:  it’s a type of speech with features associated with the Greater London Area.

Getting back to Mr. Gervais, though, let’s take a listen to his accent (apologies for possible YouTube ads):

The problem with seeking evidence for Estuary’s spread is that many London English features were already present in areas throughout Southern England.  Gervais is from Reading, a city which, given its geographical location between London and the West Country, seems especially hard to pin down in terms of local vs. non-local speech.

In fact, there were “Estuary” features in Reading’s accent that pre-date the coinage of the term.  The 1950s Survey of English Dialects profiled a speaker from Swallowfield, a rural village now incorporated into Reading.  The elderly interviewee, born in 1887, exhibited several features popularly associated with London:  t-glottalling (the ‘t’ in better is pronounced with a glottal stop); backing of the first element in the diphthong in kite and time; and fronting of the first element in the diphthong in mouth and loud.  So it’s hard to say how the accent has changed recently to fit a more “London” mold.

Why, then, do I consider Gervais an Estuary speaker?  I must admit, my classification stems primarily from his frequent vocalization of the letter ‘l’ (i.e. he turns the ‘l’ at the end of “bottle” and “ball” into an “oo” or “w” sound).  That doesn’t strike me as part of the ‘traditional’ Reading accent, but I can’t say for sure: I don’t know what the city may (or may not) have once sounded like.

I’d like to put this to something of a vote, though:  could Gervais be described as an Estuary speaker?  Or would his accent be better classified along local lines?

Ben T. Smith launched his dialect fascination while working in theatre. He has worked as an actor, playwright, director, critic and dialect coach. Other passions include linguistics, urban development, philosophy and film.
View all posts by Ben →
This entry was posted in British English and tagged Estuary English. Bookmark the permalink.