The Accent(s) of the Pacific Northwest 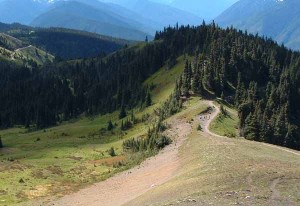 I’m moving to the Pacific Northwest in about six weeks.  I will soon be able to participate in a hotly debated topic: is there such a thing as a Pacific Northwest accent?  And if there is, what does it sound like?

As I’ve mentioned before, I mistook a number of Northwest natives for Canadians some years back.  In this interview, Bill Gates exemplifies some of the features that led me to this wrong conclusion:

Like many Canadians, Gates uses a vowel for words like “lot” and “top” which tends to be more back and rounded (i.e. an “aw” or IPA ɒ].  He also exhibits a vowel in words like “trap” or “that” which is somewhat more back as well (i.e. IPA [a]).  Both are features of some varieties of California English, so one might presume these pronunciations to be more indicative of the West Coast than our neighbors to the North.

All this being said, Gates strikes me as one of a slightly endangered breed:  a Seattleite with parents from the Northwest.  Young natives of the city are likely to have parents from New York, Chicago, Los Angeles, or some other far-flung place.  Given the tremendous amount of transplantation that has occurred in the region, I think it will be some time before the accents of Seattle (and no doubt Portland as well) will resettle into something that can be easily identified.

Like other areas of the West, the region feels a linguistic crucible, a place where new varieties of English are stirred together and create more exceptions that rules.  For example, like Gates, singer-songwriter Brandi Carlile has spent much of her life in and around Seattle.  But as you can see from this interview, she speaks with what might be described as a slight “twang” (note how “I” and “time” tend toward “ah” and “tahm”).

I realize that Carlile may have one of those unique “musicians’ accents,” similar to New Jersey native Bruce Springsteen’s rather un-New Jersey speech. (I don’t want to conclude anything based on this single speaker).  But her accent may also be indicative of a region that hasn’t quite found its voice yet, a place where younger people readily adopt the features of the sub-cultures they identify with.

Any Northwesterners care to elaborate?

Ben T. Smith launched his dialect fascination while working in theatre. He has worked as an actor, playwright, director, critic and dialect coach. Other passions include linguistics, urban development, philosophy and film.
View all posts by Ben →
This entry was posted in American English and tagged Canadian Accents, canadian raising. Bookmark the permalink.

44 Responses to The Accent(s) of the Pacific Northwest