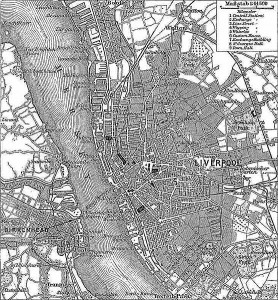 Scouse, the native accent of Liverpool, has comparatively unique features when compared to the surrounding area. Where Manchester and Leeds can arguably sound like variations of the same accent, Scouse seems to be in a world all its own.

One of the most unique Scouse features is the way the accent renders the letter ‘t.’ At the beginning of a word or a stressed syllable, /t/ is affricated, becoming something of a /ts/ sound: tree becomes ‘tsree,’ town becomes ‘tsown,’ and Tom becomes ‘tsom.’

But in between vowels and at the end of words, Liverpool /t/ is an exotic consonant popularly termed the ‘slit t.’ This might crudely be described as a sound between /t/ and /s/. Like /t/, it is pronounced with the tip of the tongue making contact with the alveolar ridge (the hard ridge right behind the top row of teeth). Like an /s/, however, the ‘slit t’ is a fricative, pronounced by passing air through the small opening created by the tongue’s position (hence the ‘slit’). To outsiders, then, the word butter might sound slightly like ‘busser.’

The ‘slit t’ is also found in Irish English, giving rise to a commonly-held assumption that Irish immigration to Liverpool led Scouse to adopt this ‘Irish sound.’ Given the city’s longstanding ties to the Emerald Isle, this seems a plausible theory.  Yet as I’ll explain later in the post, I have some reservations about the Liverpool-Ireland connection.

First though, a bit of background information.  The ‘slit t’ is part of a greater phenomenon called lenition, whereby stop consonants becomes ‘weaker’ or ‘softer.’ In Scouse, lenition not only affects /t/, but extends to /k/ (which can become the /x/ sound in Scottish loch) and /p/ (which can become the /ɸ/ sound heard in Japanese Fuji).

You can frequently hear the lenited /k/ in the speech of footballer and Liverpool local Steven Gerrard.  Notice the frequence of the ‘kh’ (i.e. /x/) sound in this interview:

Anyway, /p/ and /k/ lenition is not typically found in Irish English, perhaps weakening the argument that Scouse ‘slit t’ is a relative of Irish ‘slit t.’  [Ed. Note:  I expand upon this point in the comments below]. In Liverpool, lenition is common to several consonants, not just /t./

The rebuttal to this objection, put forth by linguist Raymond Hickey*, is that lenition in Scouse doesn’t necessarily come from Irish English, but rather the Irish Language itself. In particular, lenition of /k/,/t/,/d/ and /p/ bears a more-than-passing resemblance to the phenomenon of Irish consonant mutation.

This ‘mutation,’ contrary to what it sounds like, does not describe a consonant with extra eyes and green skin. Rather, it is a process whereby the first letter in an Irish word changes to a ‘softer’ consonant to serve some grammatical function. For example, the Irish word cos (meaning ‘leg’) might transform to chos depending on the grammatical context. This results in the /k/ sound changing to the ‘kh’ (i.e. /x/) sound (again, as in Scottish ‘loch‘).

1.) Irish consonant mutation occurs primarily at the beginning of words, rather than the middle or end of words (as in Scouse).

2.) If Irish consonant mutation is what led to lenition in Scouse, then why do we not see a similar pattern in actual Irish English accents?

But another thing puzzles me about the Irish-Scouse theory.  Many American cities, Boston being an excellent example, greeted similarly large masses of Irish immigrants in the 19th-Century.  Yet to my knowledge, no American accent adopted any type of Scouse-style lenition.  Not to mention that the nearby city of Manchester saw more than its share of Irish immigration, again with little indication of lenition being part of the local speech.

So why is Scouse so exceptional in this regard?

Ben T. Smith launched his dialect fascination while working in theatre. He has worked as an actor, playwright, director, critic and dialect coach. Other passions include linguistics, urban development, philosophy and film.
View all posts by Ben →
This entry was posted in British English and tagged lenition, phonetics. Bookmark the permalink.