When ‘Price’ and ‘Prize’ Don’t Rhyme 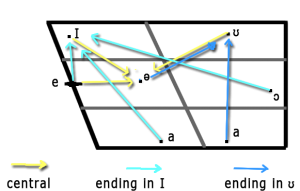 In recent years, I’ve noticed a growing phenomenon among American English speakers. People with otherwise “standard” accents exhibit a “non-standard” pronunciation of words like price, right, and kite. To use right as an example, this results in pronunciations which sound to listeners like “rate,” “royt,” or “ruh-eet.”  To put that into impressionistic terms, the diphthong seems to become “tighter.”

This quirk is due to what might be termed the price-prize split.  In many accents, there is a difference between the ay sound in “price,” “right,” and “kite,” and the /ay/ sound in “prize,” “ride,” and “flies.” Before a voiceless consonant, the /ay/ vowel is shorter in duration and sometimes different in quality (e.g. Canadian prize–IPA praɪz–contrasts with Canadian price–IPA prʌɪs).*

(I realize that, contrary to the title of this post, this isn’t a matter of “rhyme.”  But I dunno … “Price and Prize Aren’t Assonant” doesn’t pack the same punch. )

The price-prize split is most commonly referenced as a feature of Canadian Accents, part of the phenomenon of Canadian raising. But it’s heard in many other accents as well:

I’ve noted similar, less-discussed distinctions. For example, It’s apparent to me that some New Yorkers pronounce “right” and “ride” differently: where the former is similar to other American accents, the latter diphththong has a back onglide (i.e. IPA rɑɪd, making it sound like “royd” to outsiders).

In fact, it seems that various types of price-prize distinctions have become very widespread in the US.  Perhaps the most well-observed of these splits is found in parts of the American South, where price is pronounced as it is in General American English, while prize is “prahz” (IPA pra:z).

But I’ve heard similar splits in parts of New Jersey, various areas of the Northern US, California and the West. Indeed, I myself make a slight distinction between the two words (probably along the lines of IPA praɪz vs. prɐɪz, for you phonetics hounds out there).

A related observation is that most English speakers pronounce “price” with a much “faster” diphthong that the diphthong in “prize.” If you’re a native English speaker, give it a whirl: say the word “right” then the word “ride.”  You’ll notice the latter has a longer, more drawn out quality than the former. It’s logical that, when pronouncing a diphthong more rapidly, the actual distance between the two vowels might shorten, yielding a different pronunciation.**

What I wonder, though, is why some accents make such a large distinction between the two, whereas other don’t. For example, why do areas in the mid-Atlantic (i.e. Philadelphia, Baltimore, etc.) exhibit such a large divide between prize and price (often ɑɪ vs. əɪ), while New Yorkers only make a slight distinction (perhaps ɑɪ vs. aɪ)?

Any other PRICE-PRIZE splits worth mentioning?

*Phonetics novices may notice I’m using a lot of the International Phonetic Alphabet in this post.  I normally try to use accompanying “laymen’s transcriptions,” but since I’m discussing minute distinctions here, I found it difficult.  You may want to consult my IPA cheat sheet.  Or, if you have more time, the International Phonetic Alphabet tutorial I created some months back.

**Articulatory phoneticians would have a lot more to say about this.  I’m speaking very generally.

Ben T. Smith launched his dialect fascination while working in theatre. He has worked as an actor, playwright, director, critic and dialect coach. Other passions include linguistics, urban development, philosophy and film.
View all posts by Ben →
This entry was posted in English Phonetics and tagged Canadian Accents, canadian raising, General American English (GenAm), phonetics. Bookmark the permalink.

20 Responses to When ‘Price’ and ‘Prize’ Don’t Rhyme