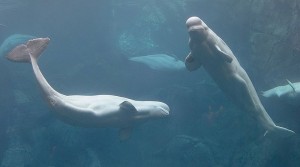 [Ed. Note:  I’m on vacation till Saturday, July 30, so I’m publishing some old posts I drafted but never published.  Some of these might be rough around the edges.  Also note that it may be difficult for me to respond to comments.  But feel to discuss!]

Are there “animal accents?”

There has been a news article circulating rececently about “whale accents.” Apparently, while whales exhibit the same types of communication, they do so in very different ways. Here’s a more technical take from an article on the subject:

“It’s not that the individuals in a group are making different codas, they don’t have different names, they just say the same things in different ways,” said study researcher Shane Gero, of Dalhousie University in Halifax, Nova Scotia, Canada. “We believe they can pick between each other, that they can tell each other apart by this call.”

I suppose animals could be said to have “accents” of a sort. Just as humans have individual ways of speaking, so dogs have individual barks. Whether or not Rover and Fluffy have different “accents” is a matter of semantics. But the same basic principle applies.

Of course, when people discuss “accents” they are usually referring to accents typical of a larger group–a region, socioeconomic level or ethnicity. And this is where the comparison to animals gets trickier.  A St. Bernard and a Chihuahua obviously have different barks. But there are obvious genetic differences that account for this. These are not comparable to the differences between a London accent and one from Tennessee.  They’re more akin to the difference between an alto and a soprano singer.

The problem here is that in order to identify actual regional or “sociological” differences in the way animals “pronounce” their “languages”, you’d have to prove that those differences are not merely genetic. And in the animal world, that’s a pretty tall order.  Debates over what is innate vs. deliberate in the animal kingdom continue to rage.  (See discussions of apes’ use of sign language for one such spat).

On the other hand, you might be able to identify animal “dialects.”  Although I again cite my lack of zoological knowledge, I’d suspect wolf packs, flocks of birds, and schools of dolphins use sounds unique to that pack, flock or school.    Whether this can be equated to differences in human language, I can’t quite say.

Ben T. Smith launched his dialect fascination while working in theatre. He has worked as an actor, playwright, director, critic and dialect coach. Other passions include linguistics, urban development, philosophy and film.
View all posts by Ben →
This entry was posted in Miscellaneous Accents and Dialects and tagged unusual accents and dialects. Bookmark the permalink.