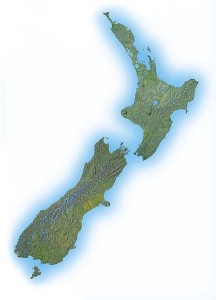 I want to quickly clear something up about New Zealand accents, since the topic was touched upon briefly yesterday.

In New Zealand English, the vowel in “short e” words like dress or bed moves very close to the vowel that Americans and Brits use in the word kit. In a strong Kiwi accent, therefore, red will sound very similar to American rid (i.e. IPA ɹɪd).

To an outsider, then, New Zealand bet and bit can sound sort of like “bit” and “but” (this is more accurately IPA bet and bɘt, but the “layman’s” transcription is more amusing!)

I would be remiss if I didn’t mention that the vowel in words like trap in NZ English likewise moves upward toward the vowel in dress. To give an example of all these vowel shifts in action, if a New Zealander were to say …

Peck the pack of pickles

Pick the peck of puckles

(In IPA, this would be pek ðə pɛk əv pɘkɫz.)

This little quirk is the biggest difference between Australian English and New Zealand English. In Australian accents, the vowel in kit actually does the opposite:  it moves toward the vowel in fleece. Hence Australian bit can sound a bit like beat to an American.

I hope this clarifies things.  I’ll end this post with an accent sample of a famous New Zealander, so you can see what I’m talking about for yourself. Here’s a snippet of NZ prime minister John Key:

P.S. This post is unusually terse today as I have been battling massive server outages with my web host.  My apologies for anybody trying to reach my site earlier this morning!

Ben T. Smith launched his dialect fascination while working in theatre. He has worked as an actor, playwright, director, critic and dialect coach. Other passions include linguistics, urban development, philosophy and film.
View all posts by Ben →
This entry was posted in Miscellaneous Accents and Dialects and tagged new zealand accents, unusual accents and dialects, vowel shifts. Bookmark the permalink.

10 Responses to A Brief Clarification About New Zealand Accents