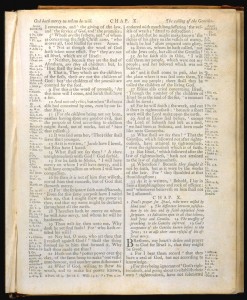 King James' Bible, a text with frequent "thou" usage

Remember thou, the word that perplexed every high-schooler forced to read Shakespeare and Chaucer? What happened to that word?

Thou, as one can deduce, meant “you” up until the 1600s or so. You, in fact, was originally a second person plural, meaning it referred to a group of people, similar to modern-day dialect words like y’all, youse, or you guys.

Then, around the time of Shakespeare, thou started to recede. I’ve never read a fully satisfying explanation for why thou disappeared, but disappear it did. Soon enough, you replaced thou completely in most dialects. It’s appropriately Shakespearean: once-mighty King Thou, replaced by his crafty brother You, relegated to an eternal exile from the Kingdom of standard English.

Thou didn’t completely die out, however. As anybody who has read a DH Lawrence novel set in the East Midlands can tell you, thou remained a feature of some (mostly rural) dialects in England. The question is, are any of these dialects still around?

To answer this question, let’s look at the official party line, so to speak, regarding contemporary thou. Here is a choice quote from Wikipedia:

In traditional dialects, thou is used in the counties of Westmorland, Durham, Lancashire, Yorkshire, Staffordshire, Derbyshire and some western parts of Nottinghamshire.[34]

Wikipedia cites Peter Trudgill’s The Dialects of England here, so I’ll tentatively accept the statement as true. But I don’t really understand what “traditional dialects” means. Do these dialects still exist?

I decided to do a bit of searching myself. I headed over to the British Library website, and looked through the recordings from the Leeds Survey of English study. Most of the speakers analyzed were born in the 1870s and 1880s, so it gives us a good idea of the status of thou 100 years ago.

In Nottinghamshire and Westmorland, I couldn’t find any recordings that featured thou. This evidence would suggest that, in those counties, the word was already receding by the late Victorian era. Of several recordings for Staffordshire and Derbyshire, there was only one thou speaker each. Again, I’d guess the word was dying out in those counties by the turn of the 20th-Century.*

But in Yorkshire and Lancashire, the majority of the Leeds recordings featured thou or its variants thy and thee. And in Durham, though there were fewer accent samples, there were quite a few thou‘s as well.  So it would appear that, until at least WWI, thou was widespread across a large expanse of Northern England.

But while we have evidence that “thou” lasted into the 20th-Century, we haven’t answered our question: has thou survived in England to the present day? The word (or variants) is definitely used in the contemporary Scots language, so I wouldn’t be surprised if there were Scottish dialects slightly closer to standard English which feature it as well. But are there any true-blue modern English dialects with thou?

And this is where I could use some advice. Has anybody encountered a clip of a modern-day dialect of English that features thou? Or some other evidence of conteporary thou usage?

*Just to be clear, I actually did not spend hours last night pouring through dozens of audio recordings. The British library has a detailed linguistic analysis of each of the recordings in the study, and clearly states if they feature “thou.”

Ben T. Smith launched his dialect fascination while working in theatre. He has worked as an actor, playwright, director, critic and dialect coach. Other passions include linguistics, urban development, philosophy and film.
View all posts by Ben →
This entry was posted in British English and tagged second person plural, thou. Bookmark the permalink.