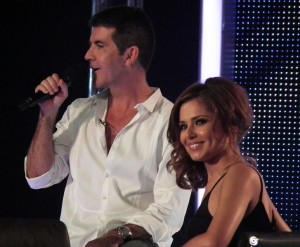 I don’t want this to turn into a pop culture site, but it is hard to ignore the recent hubbub surrounding Cheryl Cole. As I mentioned a few days back, Ms. Cole is a pretty pop singer from the UK who was told to lose her Geordie (Newcastle) accent before appearing on the US version of her hit TV show, The X Factor.

Yesterday, this piece in the BBC’s magazine explored the issue, with this pointed quote from Critic Kevin O’Sullivan on Americans’ perception of British dialects:

“Americans have two British accents that they recognise – standard-issue received pronunciation and Cockney, as long as the latter isn’t too pronounced. No-one over there can understand strong northern accents.”

My pedestrian observation? I don’t find Ms. Cole that hard to understand. Her accent is already a watered-down version of Geordie. It’s certainly not the classic Geordie accent, where the phrase “I drove down to the Tyneside” would sound like “Uh druhv doon to the Tanesade” (IPA ə dɹɞ:v du:n tə ðə tɛɪnsɛɪd).

And forgive the tabloid purience of what I’m about to say but … isn’t Cole’s accent part of her “swoon factor?” It would make as little sense to tell Colin Farrell to drop the brogue in interviews.

Okay. I’m going to stop now, before this post verges into Daily Mirror territory. Because I don’t have the most typical “American ear,” I’ll let you guys decide for yourself: below is a video clip of Cole speaking to an American interviewer. Would her dialect fly in the States? Or would it be a hindrance?

Ben T. Smith launched his dialect fascination while working in theatre. He has worked as an actor, playwright, director, critic and dialect coach. Other passions include linguistics, urban development, philosophy and film.
View all posts by Ben →
This entry was posted in British English, Uncategorized and tagged celebrity accents, dialects and comprehension, dialects in TV, geordie, stigmatized accents, unusual accents and dialects. Bookmark the permalink.