Jonathan Ross and the Letter R 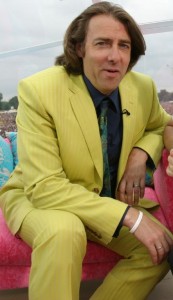 For many years, Britons have mocked television host Jonathan Ross for his pronunciation of the letter “r.” Ross seems to replace this letter with a “w,” so it appears to oustiders that he pronounces his own name “Jonathan Woss.” In reality, this perception is not quite right.

Ross exhibits something I like to call “non-rhotic dialect r fronting.” I’ve noticed that It has often been noted that some speakers of non-rhotic dialects (i.e. dialects where the “r” is dropped at the end of words like “car” and “butter”) have a tendency to front the letter r in other contexts.

There are a few dialects where I’ve seen this to be the case: Cockney/Southeast England, New York City and Boston. Usually what happens here is that instead of pronouncing “r” with the “standard” English alveolar approximant (IPA [ɹ]), it is pronounced a bit more forward in the mouth as a labiodental approximant (IPA [ʋ]).

To put this into plain English, it means that where an average American or Brit would pronounce “r” with their tongue planced on the ridge behind the top teeth, Jonathan Ross and people like him pronounce it with the bottom lip placed near the top teeth. It’s not actually “w” we’re hearing, but something in between Standard English “w” and “r.”

There are two other (American) celebrity examples of this: Barbara Walters and Matt LeBlanc (of Friends fame). Walters has received a lot of ribbing about her “loose” r’s, resulting in the Saturday Night Live impression of her from the 1970s in which she opened her talk show with, “hello, I’m Bawbwa Wawa.” The reality is that Walters, who grew up in Boston, exhibits a dialect feature common to where she is from.

Matt LeBlanc is also from Boston, and while his accent is mild, he still displays a bit of the “fronted r:” in old Friends episodes he said the word “Rachel” a bit like “Wrachel.” It isn’t as strong as the other two examples, but you can still hear a slight fronting of the “r.”

I am sure there is a theory about why this happens, but I haven’t read it (yet). Nevertheless, I believe this is an actual dialect feature and not just an individual quirk. The next time you want to make fun of Barbara Walters or Jonathan Ross, realize they’re speaking with accents, not speech impediments.

Ben T. Smith launched his dialect fascination while working in theatre. He has worked as an actor, playwright, director, critic and dialect coach. Other passions include linguistics, urban development, philosophy and film.
View all posts by Ben →
This entry was posted in English Phonetics and tagged Boston accents, celebrity accents, dialects in TV. Bookmark the permalink.

12 Responses to Jonathan Ross and the Letter R