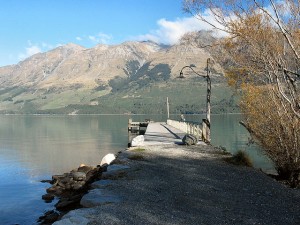 Over the holidays, I watched Jane Campion’s Top of the Lake, an excellent miniseries about a beautiful but troubled community in New Zealand’s South Island. American actress Elisabeth Moss plays the lead role of a police detective who has returned to her hometown after a spell in Australia.

I must confess to skepticism about Ms. Moss playing a Kiwi, if only because I’ve never seen her portray a non-American. But I thought she did a good job speaking with a kind of pan-Southern-Hemispheric accent (it’s in the script; characters comment on her character’s accent being muddled). Being a nitpicker, though, I noticed that she used a vowel in words like “goat” and “row” with a vowel a bit more “American” than one would find in either Australia or New Zealand (i.e. oʊ).

Ms. Moss is hardly alone in this, it should be pointed out. As per my last post, one of Dick Van Dyke’s biggest blunders in Mary Poppins was to consistently use an overly back vowel in such “oh” words. Moss’ accent is leagues better than Van Dyck’s, of course, but it’s a quirk I’ve likewise noticed among other Americans attempting British or Australian accents.

One of the more fascinating examples of this “mistake” comes from, curiously, an actor who largely identifies as British. If you’re unfamiliar with Shakespearean actor Mark Rylance, see if you can identify his provenance from this interview:

Is he Welsh? An Englishman returning after a sojourn in Ireland? Nope. Rylance grew up in Wisconsin (with British parents), and in interviews has attributed his unusual speech patterns to his upbringing in the Badger State. Rylance has specifically mentioned that*, even after decades of residence in the United Kingdom, he has trouble making the British GOAT vowel (presumably he meant əʊ).

What I think Rylance’s case suggests is that Americans can have a surprisingly hard time consistently producing the type of centralized or fronted vowels more typical of the UK and Australia. I’m not entirely sure why this is, but I can attest that these diphthongs challenged me when I was first attempting such accents.

I suspect that a factor is Americans’ general inconsistency with this vowel in our own accents. I’ve heard some Southern Californians, for instance, who’ve pronounced “goat” got where others would pronounce this gəʊt, with fairly significant variations within single speakers. Such fluctuations would be tricky in New Zealand English, I would think, as more retracted variants could compete with the vowel in “caught.” In other words, this may not necessarily be a case of American English being too “conservative,” but rather that Americans tend to be more “liberal” with this vowel.

*I am fairly certain this statement occurred in this article of the New Yorker. Unfortunately, I no longer subscribe, so I’m wary of attributing it to that publication. If anyone can find the original quote, it would be much appreciated!

Ben T. Smith launched his dialect fascination while working in theatre. He has worked as an actor, playwright, director, critic and dialect coach. Other passions include linguistics, urban development, philosophy and film.
View all posts by Ben →
This entry was posted in Miscellaneous Accents and Dialects and tagged dialects in TV, new zealand accents. Bookmark the permalink.

12 Responses to That Tricky “Oh”