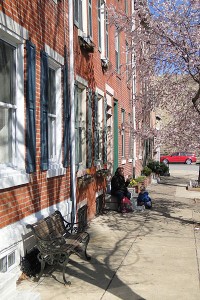 I heard rumors in college of a speech teacher with an exceptional knack for guessing dialects. He could supposedly pinpoint, within ten miles, where a student was from. “Ohio,” he would deduce. “About seven miles west from Akron.” “Bangor, Maine.” “St. Louis. The western suburbs.”

Such legends have floated around drama schools and linguistics departments for years. All are variations of “Higgins’ Boast,” the claim Shaw’s Pygmalion protagonist makes in Act I:

You can spot an Irishman or a Yorkshireman by his brogue. I can place any man within six miles. I can place him within two miles in London. Sometimes within two streets.

Alas, I find that most such boasts are exaggerations, although more plausible when Shaw was writing. Higgins was “living” in the 1910’s, a time when streets, boroughs and villages may very well have had distinguishable accents. While recently reading Douglas W. Rae’s The City, a book about American urbanism, it struck me how dense and insular communities were during the industrial era. So perhaps Epsom and Lisson Grove  were as linguistically unique as Higgins suggests.

That being said, Henry Higgins was “speaking” before modern tape recorders existed, so I don’t entirely buy his claim. He implies, for instance, that he can make such deductions as far away as Ireland. But unless Higgins had bottomless financial resources and travelled constantly, it’s unlikely he could spot the difference between, say, two nearby villages in County Kerry.

If someone were to make a similar boast today, we would find the opposite problem. One can imagine the endless hours Higgins would spend on YouTube; given the “corpus” of English speech available online, a man of his talent could come close to achieving such mastery.

But conversely, the kind of fine lines Higgins draws in Pygmalion are rarer now than they were in the late Edwardian. Given our economic and physical mobility, I have a hard time believing that there is a “Cambridge Heath Road accent” distinguishable from a “Vallance Road twang.”

Which is not to say that such guesses are impossible. For instance, while recently watching a documentary about the making of Hitchcock’s Psycho, I accurately guessed the neighborhood of the exact city where screenwriter Joseph Stefano grew up (answer after the clip):

Have you ever met someone with an ability as impressive as Higgins? Or are such feats the stuff of legend?

Ben T. Smith launched his dialect fascination while working in theatre. He has worked as an actor, playwright, director, critic and dialect coach. Other passions include linguistics, urban development, philosophy and film.
View all posts by Ben →
This entry was posted in Miscellaneous Accents and Dialects and tagged phonetics. Bookmark the permalink.