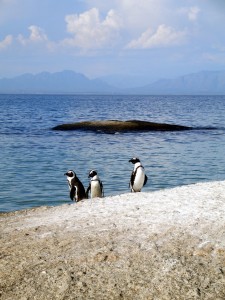 South African accents are notoriously varied, with a panoply of ethno- and sociolects befitting a country with eleven official languages. But almost all South African English is marked by its pronunciation of the ‘ee‘ in ‘fleece.’

In most English accents, the ‘ee’ vowel has a slight on-glide. That means that there is little ‘opening vowel’ before the main event, often close to the ‘i’ in ‘kit.’ For many accents (for example General American) this glide is so short that you wouldn’t notice it unless you were listening carefully. For other accents (such as Australian), the vowel is bit longer, making it sound slightly like the vowel in ‘face.’

South Africa, however, regardless of which particular sociolect we are talking about, tends to lack this glide. ‘Ee’ in ZA is usually a pure monophthong, much like the /i/ in Spanish ‘sí,’ or French ‘oui.’ I find it especially noticeable at the end of words such as ‘probably‘ or ‘already‘ (final ‘-y’ almost always has a somewhat more lax vowel in other accents).

You’ll notice this frequently in words like ‘three,’ ‘believe,’ ‘Keys,’ and ‘the‘ in this interview with South African singer Johnny Clegg:

Fans of old recordings made by Daniel Jones will note that South African ‘ee’ often sounds remarkably close to Cardinal 1; that is, it sounds like a ‘pure /i/’ sound. In most English accents, the sound in ‘me‘ or ‘fleece’ is at least a tad more lax. The Rainbow Nation is unusual in this respect.

A South African posted here earlier today saying, ‘We dont sound like anyone really.’ Between this unusual ‘ee’ sound, the unusual ‘ar’ in ‘car‘ (which is again, closer to a cardinal vowel than in most accents), and other little quirks, there is something to this sentiment. South African English is wonderfully ususual.

Ben T. Smith launched his dialect fascination while working in theatre. He has worked as an actor, playwright, director, critic and dialect coach. Other passions include linguistics, urban development, philosophy and film.
View all posts by Ben →
This entry was posted in Miscellaneous Accents and Dialects and tagged phonetics, south african accents. Bookmark the permalink.