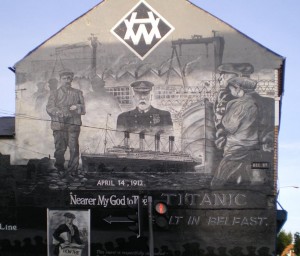 Inner-city Belfast is one of the trickiest accents for the average American to understand. Confusing factors include the unique intonation (everything sounds like a question to my ears) and diphthongs (‘bite‘ sounds like American ‘bait‘).

Yet the Belfast ‘short-a‘ is one of the most serious comprehension barriers. Whereas Americans pronounce words like ‘trap‘ and ‘cat‘ with one or two vowel allophones*, such words have a whopping five variations in Belfast.

And not just minor variations, either! The title of this post references the broad Belfast pronunciation of ‘hand bags,’ with ‘hand’ pronounced close to the American vowel in ‘lawn,’ and ‘bag’ close to American ‘beg’ (hɔnd bɛgz).** Other /a/-variants in Belfast include the æ typical of American ‘cat,’ the a typical of Northern English ‘cat,’ and the ɑ as in British RP ‘can’t.’

Are there rules for which /a/ word is assigned to which vowel? James Milroy, who studies Belfast sociolinguistics, notes some generalizations***. Words that end in /g/, /ng/, /sh/ and sometimes /k/ have a front or even raised realization (hence ‘bag’ = ‘beg’). Certain words ending in /n/ are back and sometimes rounded (hence ‘hand’ = ‘hond’ and ‘man’ = ‘mon’). Other /a/ words have the centralized vowel typical of much of Ireland and Northern England. But there is tremendous variation, with numerous exceptions and quirky little rules.

So what’s with all the different /a/’s? One might expect it has something to do with vowel lengthening rules. As in Scotland, Northern Irish English has a pattern of long vs. short vowels depending on their phonological environment. But these rules don’t offer us much help here: as per John Wells, the Northern Irish /a/ in words like ‘trap’ is long unless it comes before /p/, /t/, /k/ or /ʧ/. This obviously doesn’t explain the Belfast pattern.

Other dialects offer interesting parallels, however. The fronted or raised /a/ before /g/ (as in the ‘bag’=’beg’ thing) suggests a phenomenon called ‘velar pinching.’ One finds something similar in Western North American accents, where ‘bag’ and ‘bang’ are pronounced with an /ɛ/ or an /eɪ/. Why this ‘pinching’ pops up in such different parts of the English-speaking world is a mystery.

Meanwhile, the pronunciation of words like ‘hand’ with a back and/or rounded vowel is attested in Glasgow****. I’m not sure what the connection is, but as Northern Ireland and Scotland have historical and linguistic ties, this is not surprising.

So perhaps Belfast /a/ is so inconstant because of its many influences: Scottish English, Ulster Scots, various types of Hiberno-English and perhaps some English regional dialects as well. Urban English in general exhibits a lot of variation in the ‘trap’ vowel (note also New York and London). Belfast is especially extreme, but not unprecedentedly so.

*An allophone is, roughly speaking, an alternate way of pronouncing the same basic sound.

**Since ‘hand bag’ is arguably a compound, I’m not entirely sure about this. I’m just using it as a theoretical example.

Ben T. Smith launched his dialect fascination while working in theatre. He has worked as an actor, playwright, director, critic and dialect coach. Other passions include linguistics, urban development, philosophy and film.
View all posts by Ben →
This entry was posted in Irish English. Bookmark the permalink.