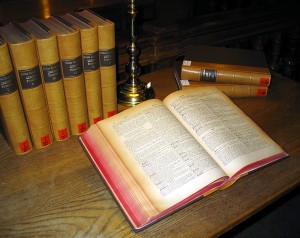 The fine folks over at Collins contacted me recently about their online dictionary. It’s in beta, but looks to be an excellent addition to a growing body of online word tools. I recommend checking it out here.

Anyway, this got me thinking. Most online dictionaries have pronunciation guides featuring IPA characters and a recording of an actor reading the word aloud. This actor is going to have an accent, of course. So how does a dictionary compiler choose which accent to feature as the ‘standard’ pronunciation?

Collins is a British dictionary, so they use Received Pronunciation (more on this in a moment). But note that the pronunciations of words in their online English-Spanish dictionary, by contrast, are typical of this side of the world. They opt for the Latin American variety of the language, as shown by the pronunciation of ‘cierto’ as sjeɾto (in much of Spain, this would be θjeɾto, with the ‘c’ pronounced the same as English ‘th’).

This is true of more than one Romance language. I used to spend hours at the foreign language dictionary shelf of Barnes & Noble, because, well, I have a rather unusual sense of fun. One thing I found most interesting is that Portuguese-English dictionaries typically use the Brazilian variety of the language for their pronunciation guides. For the Latin American languages, why do many dictionaries go with the language typical of the colonies and not the original imperial power?

(While I’m on the subject, another question about (foreign language)-English dictionaries: Why are there never, or very rarely, IPA transcriptions for words in Asian languages?)

But back to English. I should mention that I know not a thing about the compilation of dictionaries, or what the editorial process is like. But I’d imagine it’s a herculean task to make the near-endless number of choices that go into creating a work so large and definitive. After you’ve decided which accent to go with, another question arises.  As accents evolve, when do dictionary writers decide to evolve with them?

Take the vowel in the word ‘goat.’ In British dictionaries over a century ago, this vowel was represented by the diphthong oʊ, in line with the pronunciation of the word in Victorian-era Received Pronunciation. At what point did they decide to switch over to the more ‘contemporary’ vowel, əʊ?

And here in America, the contrast between the vowels in ‘caught’ and ‘cot’ has been steadily eroding throughout the country.  When will pronunciation guides in dictionaries reflect this?

Obviously, I’m not discussing books like the Longman Pronunciation Dictionary, which are compiled under the direction of renowned linguists. But for more traditional dictionaries, who makes choices about pronunciation?

*By the way, I’m nearly as fascinated by the many accents of Spanish as I am by the accents of English. Anyone who wants to talk about Mexican vowel reduction or the various allophones of the Puerto Rican /r/ is more than welcome to do so.

Ben T. Smith launched his dialect fascination while working in theatre. He has worked as an actor, playwright, director, critic and dialect coach. Other passions include linguistics, urban development, philosophy and film.
View all posts by Ben →
This entry was posted in English Phonetics, Uncategorized and tagged General American English (GenAm), phonetics, Received Pronunciation (RP), words. Bookmark the permalink.

41 Responses to On Dictionaries & Pronunciation