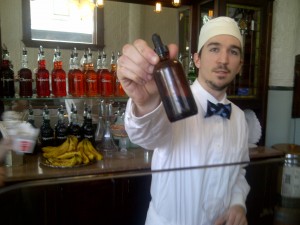 In my native New England, using ‘pop’ to refer to soft drinks is unthinkable.  So midwestern!  Having many relatives in the midwest, of course, I was often treated to this difference between our respective dialects.  Which is why I’m enamored with this dialect map of words for ‘soft drink’ created by Matthew T. Campbell. (It’s large and detailed, so I won’t post it here.)

You will notice that there are actually three ‘soft drink’ synonyms in America: Soda in New England and Northeast, pop in the midwest extending through to the Pacific Northwest; and ‘coke‘ in the American South.

Two out of three of these words makes sense given the histories of soft drinks in their regions.  The soda fountain arrived on American soil in New Haven, Connecticut, hence the word ‘soda’ was probably more entrenched in the vocabulary of the Northeast by the time that Coca-Cola emerged in the late 19th-Century.

The South, of course, is where Coca-Cola originates.  Its ubiquity may very easily have resulted in this particular brand being synonymous with soft drinks of all kind.  (Much as Band-Aid has become synonymous with small bandages).

Which leaves the onomatopoeic ‘pop’ native to dialects of the Mid- and Northwest (so named, apparently, because of the sound made when removing a cork from a carbonated beverage).  The word, in reference to soda, dates back at least to the early 19th-Century. One of its first appearances is in reference to ‘ginger pop,’ an earlier term for ginger ale and similar beverages, here mentioned in a cookbook from 1824, entitled Cookery and Confectionary:

Ginger pop. One pound of loaf sugar, one ounce cream of tartar, one ounce of ground ginger, one gallon of boiling water; mix together; when nearly cold, add one spoonful of yeast; strain and bottle it; tie the cork over, and in six hours it is fit for use.

What this suggests is that the Northeastern and Southern terms for soft drinks are perhaps more innovative than ‘pop.’ The soda fountain apparently remained confined to the Northeast until the 1830s, and Coca-Cola didn’t arrive until even later. Still, I find it strange that American dialects are so clearly divided in this respect over a hundred years later.

29 Responses to Pop vs. Soda