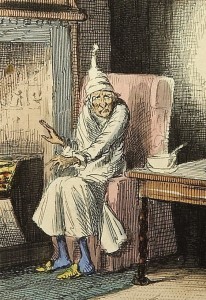 Scrooge, from the 1st Edition of 'A Christmas Carol'

Christmas greetings differ on each side of the Atlantic.  Here in the U.S., ‘Merry Christmas‘ is used almost exclusively, while ‘Happy Christmas‘ seems more common among dialects in UK.

But wait.  Didn’t the very British A Christmas Carol feature the term ‘Merry Christmas’ prominently?  Where did this ‘happy’ business come into play?

Not only was ‘Merry Christmas’ an important part of Dickens’ classic, but I would argue it was instrumental in popularizing the term.

For evidence, one might turn to the infinitely addictive Google NGram viewer (an online tool for finding the incidence of words and phrases in books throughout history). Take a look at this search results for ‘merry Christmas:’

In the decade after the publication of A Christmas Carol, use of the term increases dramatically. You may wonder why this then appears to decrease after the mid-1860’s.  This most likely results from NGram Viewer being case-sensitive:  After the mid-19th-century, fully capitalized ‘Merry Christmas’ becomes more common, and so occurrences are more equally distributed between capitalized and non-capitalized ‘merry.’

(By the way, I doubt Dickens was the only factor in the popularization of ‘Merry Christmas.’ The Victorian Era saw both the revival of the holiday and the creation of much of the imagery associated with it. But Scrooge no doubt helped.)

So how did ‘happy Christmas’ become so much more common in the UK?  Alas, NGram Viewer offers little indication for why this might be: usage begins to increase in the mid-19th-century, and steadily rises until the present day.  The theory I’ve encountered the most relates to turnover in the monarchy. Note this interesting explanation from The Phrase Finder:

That change in meaning [i.e. the ‘Merry’ in ‘Merry Christmas’] is apparently viewed with disfavour by Queen Elizabeth II, who wishes her subjects a ‘happy’ rather than ‘merry’ Christmas in her annual Christmas broadcasts. The idea of a modern-day merry England is presumably unwelcome at the palace.

Did the Queen’s aversion to this particular greeting prompt the change? I have no idea. What I find more curious is that ‘merry Christmas’ has remained part of the lexicon of American dialects as long as it has. Almost every holiday is ‘happy’ here, so why is ‘merry Christmas’ the odd exception?

17 Responses to The Christmas Dialect Divide