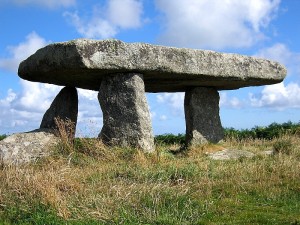 Half of my last name is ‘Trawick,’ which is a Cornish surname.  Or rather, Anglicized Cornish–it apparently derives from ‘Traweek.’ I’ve seen a few competing ‘Trawick’ etymologies, but after some ancestral research, this seems the most plausible contender.  As such, I’ve developed an interest in the people and language of Cornwall, and have wondered, of course, if there is such a thing as a ‘Cornish accent.’

Cornwall, along with Ireland, Wales, the Isle of Man, Scotland, is one of the five Celtic nations of the British Isles.  This second-smallest of the nations is unique, however, in that it remains part of mainland England.  Its native language has fared poorly when compared to Welsh, Scottish Gaelic, Scots, or even the Irish language: there were only a few hundred fluent speakers by 2000 (these numbers have increased since then, thanks to a language-revival campaign).

With this in mind, is there an identifiable Cornish accent?  Yes and no.  There is certainly an accent spoken in Cornwall (a few accents, actually).  Let’s take a listen to an example of such an accent, courtesy of former Cornish wrestler Gerry Trawley:

Trawley clearly speaks with an accent closely related to other accents in Western England (which are generally marked by their rhoticity, or r-fulness).  His accent does not strike me as divorced from others in Southern England.

This is clearly a different situation from Ireland, Scotland and Wales, where English accents keep a connection (even if tenuous) to the Irish, Gaelic, Scots or Welsh languages. More importantly, the accents of those other nations are more strikingly noncontinuous with the accents of England (although there are exceptions).

None of this is particularly surprising. Monolingual Cornish speakers appear to have died out in the 17th-Century, while Irish was still a majority language in Galway and Donegal a good two hundred years later. The situation simply isn’t comparable, as the Cornish language hasn’t exerted any influence on English for a good 400 years or so.

This has resulted in a mishmash of local accents that are not very consistent throughout Cornwall. In particular, there seems (or at least seemed) something of a divide between the Western and Eastern halves of the county.  The data from the Survey of English Dialects in the 1960’s suggested that Eastern Cornwall is influenced by its proximity to Devon*.  But even further West, the accents seem to show features more typical of the larger region in England to which Cornwall belongs (for instance, voiceless fricatives like ‘f,’ and ‘s’ can sometimes be voiced, becoming ‘v’ and ‘z.’)

One last, slightly unrelated mystery.  I’ve never quite figured out the pronunciation of my last name, which in America is TRAY-wick.  How this evolved from ‘Traweek’ is beyond me!

*The phonetically inclined might note some data from the SED: Speakers from Western Cornwall pronounced ‘mouth’ with a vowel of the type [ɛʊ], while in the two towns of Eastern Cornwall a more ‘Devonian’ realization was found: [əʏ] or [ɐʏ].

Ben T. Smith launched his dialect fascination while working in theatre. He has worked as an actor, playwright, director, critic and dialect coach. Other passions include linguistics, urban development, philosophy and film.
View all posts by Ben →
This entry was posted in British English and tagged Rhotic vs. Non-Rhotic. Bookmark the permalink.

21 Responses to The Cornish Accent?