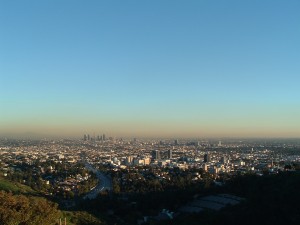 It’s not often that an American newspaper devotes a 1000-word article to a single dialect of English. So I was delighted to read an in-depth profile of Chicano English in this week’s LA times. Author Hector Becerra highlights one of the more remarkable aspects of this ethnolect, its adoption by non-Hispanics.

Chicano English, which refers to the dialect(s) spoken by Mexican Americans, is here termed ‘The East LA accent.’ This is a slight misnomer; as the article mentions, the dialect itself has a unique lexicon.  (The author makes the common mistake of confusing ‘accent’ and ‘dialect,’ but it’s a forgiveable error.) The piece mentions such pronunciation features as:

*The unstressed first syllable in words like ‘together’ becomes an ‘oo’ sound (i.e. an [u] sound).

(With some of these, I’m making educated guesses–journalistic descriptions of pronunciation are sometimes tricky to parse.)

All this being said, the words themselves are what makes the dialect unique. Becerra cites the ubiquitous tag ‘eh’ (as in ‘I’m going to the store, eh’); the use of ‘barely’ to refer to the recent past (as in ‘She barely left the store’); and the interjection ‘watcha!’ (comparable to ‘look!’).

As I mentioned, Chicano English is not confined to Mexican Americans. And although the article relates this language spread to East L.A. specifically, my impression is that Spanish-influenced dialects spoken by non-hispanics can be found in many areas of the Southwest. I once had a coworker of Irish descent who grew up in Long Beach (in South L.A. county) whose speech was clearly influenced by the Chicano dialect. I’ve also heard working-class caucasians from New Mexico who speak with accents indistinguishable from their hispanic counterparts.

None of this should be surprising. Over the past decades, divisions between ethnolects have broken down considerably. It’s no secret that African American Vernacular English is not only native to African Americans, nor that Multicultural British English is confined to Anglo-Carribeans. One might presume Chicano English to be different because of its Spanish-language origins, but the principle remains the same.

It remains to be seen how Chicano English will impact ‘mainstream’ dialects. Ethnolects have already exerted a profound influence on the American voice. Will the rapidly growing Hispanic population continue this process?