A Lexical Beef: ‘Boyfriend’ and ‘Girlfriend’ 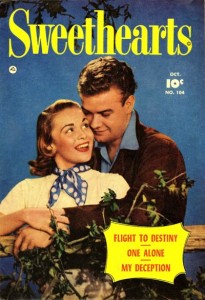 I have been away from this blog for several days, due to a single reason (no pun intended): I got married yesterday. Since my single life has come to an end, I’d like to take a brief pause from discussing dialects to air a lexical complaint related to singlehood: I really dislike the terms boyfriend and girlfriend.

Don’t get me wrong.  If 14-year-old sweethearts refer to each other in this manner, it doesn’t bother me. But I’m an adult, and there’s something juvenile about referring to a significant other as a ‘girl’ or ‘boy.’  And yet these appellations have had seen very little competition, at least in American English.

Not that there aren’t some limitations in the alternatives. I certainly wouldn’t prefer lover, for example, which has adopted an overtly sexual connotation.  Nor am I fond of the hopelessly vague partner.  Nor still the sappy sweethearts.  Still, I wish there were some way to refer one’s fully grown better half without misclassifying him/her as a ‘girl’ or ‘boy.’

Etymology Online dates the term “boyfriend,” meaning “woman’s paramour,” to 1909. However, the term has an earlier platonic sense.  The first use I managed to find in Google Books, from an obscure 1850 publication titled Friends’ review: a religious, literary and miscellaneous journal, describes the friend of a young man, not the lover of a young woman:

Though daily occupied with his drudgery as a farm servant, he began to instruct himself in Latin and Greek. A boy friend lent him several books necessary in these studies…

Girlfriend seems to have had a similar trajectory, beginning as a term for a young female friend, only taking on romantic connotations after the conversion of boyfriend.  Intriguingly, the original sense of girlfriend is still alive and kicking, as one can hear in phrases like, “I’m going to spend some time with my girlfriends this weekend.”  I can’t say for sure why the platonic meaning of boyfriend didn’t also survive.  Perhaps some consider it un-masculine to refer to your drinking buddies the same way their girlfriends do?

The construction ‘my + [man/woman synonym]’ to label one’s better half has had various incarnations over the years.  Such examples include my guy, my fella, my man, my woman, or my lady.  However, these terms have never moved past the stage of informality: when introducing your boyfriend at a work function, would you say, “This is my man, Dave?”  Probably not.

Then there’s the semi-ironic lady friend.  I’ve heard people my age use this phrase, entirely in jest.  One might object to the use of ‘lady,’ a word greatly devalued in a post-aristocratic society.  But I really don’t see how calling a 40-year-old woman a ‘lady’ is any sillier than calling her a ‘girl.’  Unfortunately, lady friend also lacks a suitable male equivalent, since gentleman friend is quite unwieldy.

Why, then, in most mainstream dialects of English, are boyfriend and girlfriend the best terms we can manage? Aren’t there any more mature options?

29 Responses to A Lexical Beef: ‘Boyfriend’ and ‘Girlfriend’