Accents at the Renaissance Faire 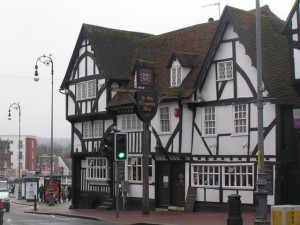 Yesterday I went to the Renaissance Faire.  For those unfamiliar with this tradition, the Ren Faire is a type of festival set in a milieu vaguely indicative of the Renaissance, with jousts, fortune tellers, mead, period music, and Elizabethan costumes.  And in an attempt to create an immersive environment, the actors who play the denizens of the faire are instructed to speak with accents.

As you might expect, there wasn’t a lot of cohesion in this regard.  Some actors spoke with a curious mishmash of British regionalisms, others with a silly imitation of Cockney, and still others with Irish brogues.  The actress playing the Queen of England, meanwhile, spoke with impeccable Received Pronunciation.  Which is admirable, if hardly how Elizabeth I would have actually spoken.

So which actors were closest to ‘getting it right?’  Probably those who made some attempt to sound Irish or like Pirates (i.e. used the West Country accent stereotypical of swashbucklers).  English in Britain, even in London, would have had something of a brogue-like sound during the time of Shakespeare.  Words like face and nose would have been monophthongs (fehs and nohs, i.e. IPA fɛ:s and no:z), and the diphthongs in kite and mouth would have have been raised as they are in broad Irish English (kuh-eet and muh-ooth, i.e. IPA kəit and məuθ).

None of this is to say there was no dialect diversity in England circa 1600.  There certainly was.  Probably more than today, in fact, since traditional dialects had not been overwhelmed by ‘standard’ English.  But suffice it to say these dialects did not correspond to the more common types of speech in contemporary England.

Don’t get me wrong, though: I didn’t crave more linguistic accuracy at the Ren Faire.  This is a deliberately anachronistic festival, after all.  Vendors sell cheese fries, India Pale Ale can be found at the taverns as easily as mead, and the day culminates in a ‘human chess match’ in which Shakespeare and female pirates appear as competitors.  Such inaccuracies doesn’t bother me so much.  Heck, bad accents might even be part of the fun.

Ben T. Smith launched his dialect fascination while working in theatre. He has worked as an actor, playwright, director, critic and dialect coach. Other passions include linguistics, urban development, philosophy and film.
View all posts by Ben →
This entry was posted in British English and tagged accents for actors, Received Pronunciation (RP). Bookmark the permalink.

4 Responses to Accents at the Renaissance Faire