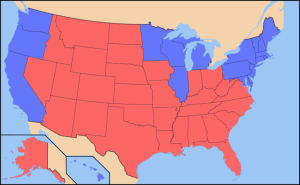 In a brief piece in Time this week, famed linguist William Labov suggested that American dialects are getting more distinct rather than less.  The article is extremely short, but I was nevertheless intrigued by Labov’s comment on the connection between accents and the Blue State/Red State divide:

It’s not entirely clear why accents are growing stronger, but Labov says that the sound differences are increasingly being exaggerated. His other explanation is that “…dialect differences have become associated with political differences, so that the Blue States/Red States division comes close to the boundary between the Northern and Midland dialects.

For the few readers who missed the “Red State/Blue State” phenomenon, Red and Blue refer to mostly conservative US states (Red) and mostly liberal US states (Blue).  The divide slightly corresponds to the American North and South, although that paints an overly simplistic picture.

The idea that political differences create dialect differences is nothing new. In fact, more than one linguist has suggested that what we think of as the “American Southern” accent emerged as a result of the political divide created by the Civil War.  Here linguist Edgar W. Schneider summarizes the work of sociolinguist Guy Bailey*:

Essentially, Bailey’s claim is that Southern English was shaped not by retentions of British dialect features but by late nineteenth-century innovations, that is, linguistic developments of the post-Civil War, “Reconstruction” period, when Southerners used distinct dialect features to express their regional identity threatened by the presence of large numbers of “Yankees.”

Is something similar happening within the context of America’s contemporary political landscape?

I’m betting Labov’s quote in the Time article is out of context (note that he isn’t really offering an “explanation”). That being said, the Red State/Blue State divide doesn’t strike me as linguistically dramatic as the Red/Blue divide between dialects within regions of the country.  Take Texas for example.  Austin, Dallas and Houston all voted Democrat in the last presidential election**, and all three cities are developing markedly less “Southern” varieties of English than those found in the rest of the state.

But I can’t say for sure if the gulf between American Liberal and Conservative politics is resulting in an equally large linguistic gulf. Have political differences really increased our dialect differences?

*Their counties did, at least.