Anna Karenina … in a British Accent? 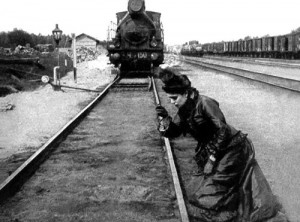 Still from a 1914 Russian film of 'Anna Karenina'

“It’s going to be an English accent. It’s always very tricky when you are doing something that is meant to be in another language. Because you are like, what accent should it be, should you do that? Well, if you’ve got a Russian accent, why aren’t you speaking Russian? It’s an English-language film. So we have taken the decision that it’s an English accent.”

I share Knightley’s ambivalence about approaching a Russian-set project with English-speaking actors. Almost any stylistic choice has its limitations.  On the one hand, you can make actors speak with some hint of a foreign accent. This strategy has been employed in such celebrated films as Schindler’s List, The Reader and Before Night Falls.  The advantages?  It helps create a ‘sense of place,’ it avoids the cognitive dissonance inherent in using an American or British accent, and it allows the film to be cast with great foreign-accented actors.

This strategy has its problems, of course.  One might argue that the effect distances audiences from the story, creating a sense of ‘foreignness’ when universality is desired.  And if the dialect work goes awry (as it sometimes does), your film may be more remembered for its bad accents than its story.

The other strategy is to use a British or American accent.  This is perhaps more logical, as Russians and Cubans don’t speak to one another like foreigners.  More ‘standard accents’ (presumably Received Pronunciation or General American English) may bring audiences closer to the story, lending an air of intimacy and modernity to the proceedings.

But this option can backfire as well.  A few years ago, I wrote a play set in 19th-Century Vienna.  The director and I made the decision early on that actors would employ American accents.  And while our preference was better than the alternative, I can’t say it didn’t bring its share of problems.  Contemporary accents can easily make things sound too contemporary, too American, too British, and end up taking the audience out of the story as much as any foreign accent would.

Anna Karenina is my favorite novel, so I’m quite biased here.  But I think the folks behind this film adaptation have the right idea.  Much of the appeal of Tolstoy’s novels lies in the breathtaking immediacy of his writing: characters from centuries past come to life as if they were sitting in your living room.  Having them speak in stilted Russian accents could easily destroy this quality.

Tolstoy also lived and wrote before the Bolshevik revolution.  For better or worse, it will take some time before Americans and Brits shrug off our association of the Russian accent with the Soviet Union.  This was an author writing about a different time and a very different country.  Anything that evokes thoughts of contemporary Russian politics should be avoided.

Of course, there will be dissenting opinions about this.  We won’t know how the accents work (or don’t) until the film comes out.

Ben T. Smith launched his dialect fascination while working in theatre. He has worked as an actor, playwright, director, critic and dialect coach. Other passions include linguistics, urban development, philosophy and film.
View all posts by Ben →
This entry was posted in Miscellaneous Accents and Dialects and tagged dialects in film, Received Pronunciation (RP). Bookmark the permalink.

11 Responses to Anna Karenina … in a British Accent?