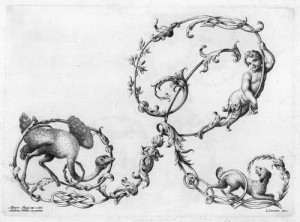 Generations of Americans have puzzled over the British tendency to add ‘r’s where (it seems to us) ‘r’s don’t belong.  This can be found in such phrases as “an idear of it,” “pastar and sauce,” and  “sawr and conquered.”  Termed r insertion (or intrusive r), this feature impacts many non-rhotic (r-less) accents.  And as we’ll discuss shortly, the phenomena has given birth to an even more unusual feature, which might be termed the hypercorrective intrusive r.

R insertion, as strange as it sounds to us r-pronouncers, is in fact guided by simple, logical rules.  For someone from London, the r pronounced in “bitter end” is no different from the r pronounced in “pastar and sauce.”  Both follow the rule that when a schwa occurs at the end of a word, and the next word begins with a vowel, r makes an appearance*.  This is also true of /ɑ:/ words (the “Shahr of Iran” follows the same rule as “car and driver”) and /ɔ:/ words (“Drawr open” is treated no differently than “Drawer open”).

Really, then, for people with r-inserting accents there is no r after vowels, even if an r appears in the spelling. Rather, there is a set of rules that dictates that /r/ appears in between vowels in certain environments.

Anyway, this brings us to the point of today’s post, the related phenomenon of hypercorrective intrusive r.  This is a largely American peculiarity whereby someone with a traditionally non-rhotic accent (as found in New York City and New England) hypercorrects and pronounces r regardless of whether it precedes a vowel.  Hence we get “I’ve got no idear what to wear!” and “He liked to drawr cats.”

I’m under the impression that the hypercorrective intrusive r is on the wane.  At the risk of stereotyping, I’ve mostly heard it among speakers over fifty from Long Island or working-class areas around Greater Boston.  It strikes me as a by-product of the dialect levelling that occurred in America after World War II, and hence a temporary product of that transition.

Mysterious to me, though, is why this levelling only seems to have produced the intrusive r phenomenon in the Northern U.S.  The American South, after all, has several non-rhotic accents that drop their r’s more extremely than New Yorkers or Bostonians.  In older Southern dialects, all r’s are dropped after vowels, in positions like that of “very” ([ve.i]) and “better off” ([beɾə ɔf]).  In essence, there never was a linking r in those accents.

Still, as non-rhoticity has receded in the South, hypercorrective intrusive r doesn’t seem to have occurred**.  The region adopted rhotic accents with a fairly effortless transition.  The same is true of African American Vernacular English.  Many AAVE speakers have transitioned to rhoticity, and yet I’ve never met an AAVE speaker who exhibits any type of intrusive r.

Why does this feature only impact certain types of accents?

**At least I don’t think it has: feel free to correct this assertion if there have indeed been Southern r-inserters.

Ben T. Smith launched his dialect fascination while working in theatre. He has worked as an actor, playwright, director, critic and dialect coach. Other passions include linguistics, urban development, philosophy and film.
View all posts by Ben →
This entry was posted in American English and tagged American Southern Accents, English schwa, Rhotic vs. Non-Rhotic. Bookmark the permalink.