More on the Ocracoke Brogue 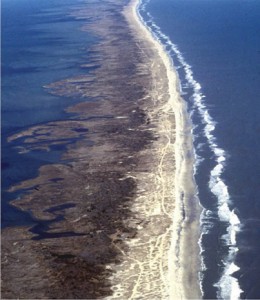 Some months back I mentioned an unusual dialect of English known colloquially as the “Ocracoke Brogue.” Spoken in the remote islands off the coast of North Carolina, the brogue is sometimes mentioned as one of the “last living relatives” of Elizabethan or Early Modern English, a result of being isolated from the mainland United States for centuries.

In reality, studies have shown that the dialect of Ocracoke has evolved considerably over the past 300 years.  The notion that people on the island speak just like the groundlings at the Globe, therefore, is pretty silly.  But it’s a notion worth exploring:  just how close to Elizabethan English is the dialect on Ocracoke?

For an idea of what the Ocracoke Brogue sounds like, I’d direct you to the first speaker in this clip:

This woman, who I’m assuming is quite elderly, has features that are typically associated with Irish or other “brogue”-like accents: She exhibits strongly monophthongal vowels in words like goat (“goht”) and face (“fehs”), and a raised pronounciation of words like house. I have less to say about the other three people in the clip, who seem to have much more typical Southern features.*

This also seems true of this clip of several men from Ocracoke:

There are some slightly brogue-like markers in their accent.  For example, they occasionally exhibit raised pronunciations of the vowel in PRICE and MOUTH (as in Irish or some West Country English). But it’s clear that many features of mainstream American Southern English have made their way onto the island. When contrasting these men to the older speaker from the first clip, it appears the accent has softened tremendously over the past hundred years.

Back to the original question, though: is the Ocracoke Brogue really a cousin of “Shakespeare’s English?” I would say no (although the question itself is rather meaningless). Given, the accent seems to exhibit several features which are common to accents labelled “brogues” or hypothesized to be “Shakespearean:”

It is true that these pronunciations were (probably) common in Shakespeare’s time. But from what I’ve read, they also would have been common in varieties of American English well into the 18th-Century**. In my mind, Ocracokers don’t preserve features of English from 400 years ago, but rather ones that died out a long time after the colonization of America.

The Shakespearean association is also perplexing in light of the actual history of the island.  It’s true that Ocracoke was visited by the very Elizabethan Sir Walter Raleigh, but this bit of trivia doesn’t make up for the fact that the island doesn’t seem to have been fully settled until 1715.  Is the accent conservative?  Yes.  But Shakespearean?  Not particularly.

I’ll conclude with a brief recommendation.  Both of the clips I used in this post were put up by The North Carolina Language and Life Project, a fantastic sociolinguistics research organization that makes short documentaries about the accents and dialects of North Carolina. These mini-docs are handsomely filmed, contain great interviews, and really let the language speak for itself. It’s a great resource.

*Two points about this for the more phonetically-inclined: (1.) this clip only identifies speakers as being from Hyde County, which also includes a large chunk of mainland North Carolina, so I’m sure there are parts of the county without any trace of a Ocracoke Brogue. (2.) The notable exception is that speaker number 2 in the clip (who sounds younger) has a rather interesting pronunciation of the GOAT vowel within the first sentence: it sounds monopthongal (with maybe a slight off-glide), and centralized–I’d need to listen to the clip more times to make an accurate judgement.

15 Responses to More on the Ocracoke Brogue