On the Evolution of “Douchebag” 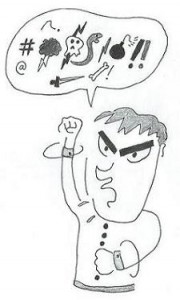 I don’t much discuss profanity here, which is unfortunate. Swear words are an indelible part of any dialect, and no discussion of spoken English would be complete without their mention. Which brings us to today’s topic, the meteoric rise of the American English epithet “douchebag.”

31st Century-anthropologists, bereft of the electronic media now at our disposal, might be flummoxed as to how douche, a word meaning “shower” in French, came to mean something along the lines of “pompous jerk.” So it helps to look at the origins of douchebag (or douche), from this Wikipedia entry:

To make this more explicit, a douchebag is part of an apparatus  used to clean certain bodily orifices. . Ick.

I must admit that douchebag (as an insult applied to people) didn’t enter my lexicon until the 2000’s. For many years, in fact, I assumed that the term was a 21st-Century coinage. After doing several searches using Google Books, however, it’s clear this isn’t the case. The first usage of douchebag/douche bag that I could find in the pejorative sense dates back to at least 1951, in the classic novel From Here to Eternity (here an adjective):

“The trouble with you, Pete,” the voice that did not seem to come with him but from that cigaret said savagely, “is that you can’t see further than that douchebag nose of yours.”

So douchebag seems to have been used in a vulgar context as far back as World War II or thereabouts. It’s worth noting, however, that this is the ONLY usage of the type found in 1950’s literature: all other examples of douchebag/douche bag refer to medicine or hygiene. I doubt the term was in popular currency at the time.

The next such usage doesn’t appear until 1964, in a stream-of-consciousness passage of another famous novel, Hubert Selby’s Last Exit to Brooklyn:

Still, examples of the pejorative douchebag in the 1960s are few and far between. And seeing as that decade was famed for its relaxation of literary puritanism, I’d hazard to guess it was still uncommon.

It was only in the following three decades that douchebag seemed to make some headway. There are about a dozen examples of the word being used pejoratively in literature between 1970-1980. In the 80s, this increases to several dozen.* And by the 1990s, this skyrockets to somewhere between 100-200.

But it’s really the 2000s where we see “douchebag” take off. Google books records the word being used 868 times, the overwhelming majority of which appear to be non-medical. This was truly the decade of the “douchebag.”

If douchebag appeared to be an epithet dating back to at least the 1950s, why did it not become as popular until the 21st Century?  My personal theory relates to the fact that douching (the act of cleaning bodily orifices with a stream of water) has become steadily less popular as a hygienic technique over the past fifty years. This is likely a result of medical warnings such as this (from the 2005 health book What Women Need to Know):

At one time, doctors routinely instructed their female patients to douche; however, that is no longer the case. Studies have shown that there is a higher rate of infection of the reproductive tract among women who douche that among women who do not.

So let’s put the pieces together. In 1960, when douching was a much more common practice and perhaps more prominent in the public imagination, douchebag would have had a much more disgusting connotation, and likely would have been avoided for this reason. But in the 21st-Century, at a time when many people barely remember what douching was to begin with, it might be taken as a less offensive insult.

I could say a lot more about this word, but I’ll stop before I start to ramble.**  I’m curious what everyone else’s experience with douchebag is. And a related question: Is “douchebag” making headway outside of the United States?

*One interesting pop cultural example is that it appears in the novelization of “ET: The Extra-terrestrial.” I can’t recall if the word is used in the film or not.

**Two examples, if anybody wants to pick up the conversation:  (1.) the rapid evolution of “douchebag” to “douche” in the past decade, and on a related note (2.) that “douche” follows the pattern of many other English profanities by being a monosyllable containing a plosive and a fricative or affricate.

42 Responses to On the Evolution of “Douchebag”