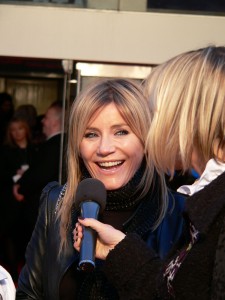 There has been a recent to-do over British actress Michelle Collins, who joined the Manchester-based soap opera Coronation Street. Collins was best known for her role in EastEnders (a soap set in East London), so her Manchester accent must come as a bit of a shock.  Still, I can’t quite wrap my head around the 34 articles about the “controversy” (as per Google News) that this accent has inspired.

For reference, here is a brief clip of Collins’ first appearance on the show.

Given the bad press, one might expect some serious mangling. But really, Collins’ accent isn’t that bad.  I suppose she sounds more generally Northern than specifically Manchester (for example, she uses a monophthongal “o” sound for words like “know” where Mancunians would probably use a diphthong.)  But at worst, she overdoes the accent more than she completely botches it.

So why all the hatchet jobs?  Well, Collins is a celebrity, and one whose fame came about from a specific role with a very specific accent (Cockney).  A similar situation might arise in America if, say, Fran Drescher starred in a TV show as a Tennessee housewife or (conversely) Jeff Foxworthy played a Brooklyn construction worker.  No matter how accurate the accent might be, the effect would be jarring.

Sometimes the problem extends to celebrities we associate with certain personas rather than accents.  On those grounds, I am one of those who half-defends Brad Pitt’s Belfast accent in The Devil’s Own.  Would I term it “good?”  Noooo.  But in the annals of bad accents in cinema, it doesn’t even belong in the top 20 for me.  In the mid-1990s, however, Pitt was seen as a kind of handsome, all-American Ken Doll, and it’s likely this perception tainted viewers expectations going in.

In a very weird way, such prejudices remind me of certain socio-phonetics studies about dialects and race (stay with me here).  Researchers have commonly found that when someone of a certain ethnic group speaks with an accent perceived as atypical of said ethnic group, the accent may be deemed wrong, unintelligible, or “fake.”*  Since we associate celebrities with very specific voices (and in the case of Collins, a specific accent**), there may be a similar phenomenon when famous faces are accompanied by unfamiliar speech patterns.

As someone who has been an actor himself, though, I admit some sensitivity to such criticisms.  At the very least, I have a problem with articles that deem an actor’s accent unworthy without giving any details as to what’s wrong with it. So if you have a problem with Collins’ Mancunian, here’s your chance to speak up.  What is specifically un-Manchester about the accent she uses?

*One example: a 1992 study paired the same recording of a General American accent with pictures of Caucasian and Asian faces. The researcher found that when the recording accompanied Asian faces, the study participants described the accent to be less comprehensible (Rubin, D. (1992). Nonlanguage factors affecting undergraduates’ judgments of nonnative English-speaking teaching assistants. Research in Higher Education, 33 (4), pp. 511-531.)

**Ironically, although Collins is from East London, her real accent is not particularly Cockney. This radio interview with the actress reveals an accent that lies closer to the Near-RP/Estuary border.  I’m not sure if she altered her accent later in life or if this is how she has always spoken.

Ben T. Smith launched his dialect fascination while working in theatre. He has worked as an actor, playwright, director, critic and dialect coach. Other passions include linguistics, urban development, philosophy and film.
View all posts by Ben →
This entry was posted in British English and tagged celebrity accents. Bookmark the permalink.