California English and the “Gay Accent” 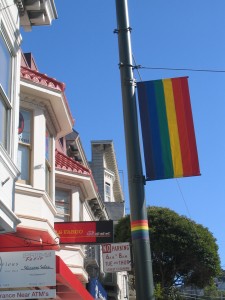 Is there such a thing as a “gay accent?”  I wouldn’t even touch this question were there not a decent amount of scholarly research about it.  The notion of “talking gay,” after all, is a staple of homophobic parody.   So before going further, let me state that I believe gay men speak with as wide an array of voices as heterosexual men.  I don’t give credence to the idea of a universal “gay voice.”

That being said, a recent article in American Speech suggests that a certain type of subcultural “gay accent” is not only a measurable phenomenon, but may have a unique relationship to a regional variety of English.

The study in question is Robert J. Podesva’s The California Vowel Shift and Gay Identity.  Podesva analyzed recordings of a single gay man living in San Francisco, Regan, in three different contexts:  a night out drinking, a private dinner with a friend, and a meeting with his boss.  As the situation becomes more informal, Podesva finds that Regan’s accent becomes notably more “Californian.”

California English is marked by the California Vowel Shift, an academic term for something many Americans recognize:  the Valley girl accent is an exaggerated example of this shift.  The vowel in “bid” shifts toward the vowel in “bed,” “bed” shifts toward “bad,” and “bad” toward “bod” (how very Californian).  Meanwhile, the vowels in “bud,” “bode” and “boot” all shift frontward.

What Podesva finds with Regan is that this shift is much less pronounced when he is talking to his boss than when he is out with friends.  In particular, Regan exhibits three markers of California English in this latter situation:  the word “bad” is pronounced with a vowel closer to the vowel in “bod,” and the vowels in “boot” and “boat” are both pronounced fronter.

In this article, I have argued that features of the [California Vowel Shift] can be used in particular gay styles (Regan’s gay “partier” persona) because regional accents index a range of meanings much richer than geographic location. In particular, the CVS indexes “fun” and “laid-back” meanings that derive from stereotypical California character types (valley girl, surfer, stoner, slacker), whose circulation led to the enregisterment of California ways of speaking.

An arguable limitation of Podesva’s study in that his subject lives in California. Does the English of the Golden State influence the speech of gay men elsewhere in the country?

My own impressions suggest this may be the case. I have, even before reading Podesva’s article, noticed some curiously Californian accent features of gay men in New York City. For example, the young (and openly gay) fashion designer Christian Siriano exhibits quite a few features that are typical of California English, despite neither growing up in nor living in California:

Siriano’s vowel for “that” and similar words is notably backer and lower than in most American accents, and, as Podesva notes with Regan, the vowels in “goat” and “goose” are also a good deal fronter as well.

Podesva argues that gay men may adopt these features because California English is associated with “fun” or “lightness.” I’d be interested in seeing if there is a generational divide: most of the pop cultural references Podesva mentions are from the 1980’s and 90’s. Is this a more recent phenomenon?  Do older gay American men exhibit such features?

Ben T. Smith launched his dialect fascination while working in theatre. He has worked as an actor, playwright, director, critic and dialect coach. Other passions include linguistics, urban development, philosophy and film.
View all posts by Ben →
This entry was posted in American English and tagged california accents. Bookmark the permalink.

40 Responses to California English and the “Gay Accent”