Is the Welsh Accent “Foreign?” 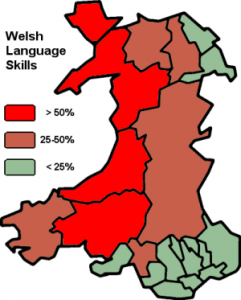 The Welsh accent is a mystery on American shores.  Numerous Welsh celebrities have made the US their home: your Hopkinses, Burtonses, Zeta-Joneses, and just plain Joneses.  Yet Americans have few of the preconceptions about Welsh English that we do for Received Pronunciation, Cockney, or Irish English.

To hear a Welsh accent as an American, then, is to hear it with virgin ears.  And one’s first impression is often one of “foreignness.”  There is something about Welsh English, in all its beauty, that can strike an outsider as exotic, as not quite of the English-speaking world.  And given that Welsh (the language) is spoken by a solid percentage of the country’s populace, can the Welsh accent itself be described as foreign?

Maybe.  Although it’s less common these days, there are certainly first-language Welsh speakers who learned English later in their childhood (musician John Cale is a good example of this).  Yet regardless of a speaker’s English acquisition, there remains something slightly different in the speech of many Welsh people.  For example, famous baritone Bryn Terfel:

Terfel’s Welsh accent is quite mild. But the rhythm of his speech is markedly different than most accents of English: like the Welsh language itself, this accent has more “evenly weighed” syllables.

For example, in most contemporary accents of English the second syllable in “language” can be expected to be reduced to an extremely short vowel, almost disappearing completely for some speakers. In some types of Welsh accents, however, each syllable in “language” is clearly pronounced, so that the word becomes something like “lang-wedge” (IPA laŋgwɛʤ)*. This is  quite different from the majority of native Englishes.

But this isn’t the only feature that marks Welsh English as a different animal. As a commenter mentioned a few posts back, the accent is remarkable for how very different it is from its neighbors. The Welsh accent is largely derived from non-rhotic Southern English dialects. Yet the nearest region of England to Wales is the West Country, an area with a brogue arguably more akin to Irish English.

Welsh English, then, most likely began as a “school-learned” accent. In this sense, its origins are similar to Indian, Singaporean or Afrikaaner English. “Foreign?” Maybe not. But I do think it’s origins as a foreign accent are more recent than most other English varieties**.

Perhaps a moot point, though: Despite the country’s promotion of its native language, the Welsh accent’s distinctiveness may be waning. With that in mind, I’ll leave you with a clip of a much younger Welsh person, courtesy of a PSA by the Welsh government. Hear any London in her speech?

*Example not my own. This is mentioned in this study of the Rhondda Valleys accent of South Wales (by Rod Walters, of the University of Glamorgan).

**Again, citing the study above, Welsh fluency in the region studied was at 61% at the turn of the 20th Century, dropping to a paltry 8% by the turn of the 21st. These figures (along with features of Welsh English like the TRAP-BATH split and non-rhoticity), and the history of Welsh industrialization, would strongly suggest 19th-Century origins.

Ben T. Smith launched his dialect fascination while working in theatre. He has worked as an actor, playwright, director, critic and dialect coach. Other passions include linguistics, urban development, philosophy and film.
View all posts by Ben →
This entry was posted in British English and tagged phonetics, prosody, welsh accents. Bookmark the permalink.

25 Responses to Is the Welsh Accent “Foreign?”