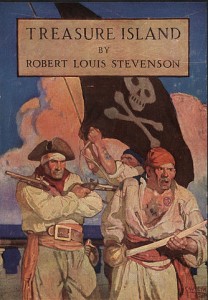 I recently read Stevenson’s Treasure Island, a story I greatly enjoy as a child. The novel’s pirates speak with a dialect I find puzzling as an adult reader: is it the West Country of the early chapters’ setting (akin to the famed “pirate dialect”)? Are some of the pirates Irish? Is some American English thrown in the mix?

Stevenson was not entirely going for accuracy. The story is so associated with the era of wigs and tri-corner hats that it’s easy to forget the book was written in the late Victorian era, and likely doesn’t reflect the speech of 18th-Century seamen with total verisimilitude. Stevenson wrote about a largely fanciful world, generally speaking. Many adaptations of the film are set in tropical climes, for instance, but the pines, grey trees, and sweltering heat that the author describes suggest a curious mashup of different locales.[1]

I find myself especially curious about the occasional Americanisms which pepper the pirates’ speech. For instance, Long John Silver uses the phrase let her rip, a term we still use in America today and seems to be of American origin. Does US English share this phrase with rural British English, or did Stevenson picked it up during a sojourn in America? He married a native of Indianapolis, after all.

The question is especially complex when young Jim Hawkins speaks of having “the blues:”

If we had been allowed to sit idle, we should all have fallen in the blues but Captain Smollett was never the man for that. All hands were called up before him, and he divided us into watches.

We tend to associate the blues with a very American musical form, but the term’s roots on this side of the Ocean are dubious.[2] A Google Books search yields a fair number of examples similar to Stevenson’s in British Victorian literature, in fact, such as this passage from an obscure tome titled Violet Rivers, by Winifred Taylor:

“I only wish there were an end to all these books, for they’re nothing but weariness of the flesh to me.” And Harry put his hands in his pockets, and gave a great yawn, as if to convince his hearers that he was speaking the truth.

“There’s no use going into the blues over them,” spoke Cecil again. “What can’t be cured must be endured, you know.”

As in the above two passages, many examples I found from the 19th-Century used the construction “in the blues,” or opted for a related adjective like “into.” But the meaning is nonetheless similar to how we treat the word in contemporary English. The term appears similarly in American texts from the period, however. So whether Stevenson picked up the term among Englishman or Americans is anyone’s guess.

[1] A point reinforced by the book’s most famous illustrator, New Englander N.C. Wyeth, who gave the island a rather Maine-like countenance.
[2] Confusing the matter is the fact that “blue” has been an adjective denoting “sadness” since the middle ages. The University of Michigan’s Middle English dictionary lists just such a figurative meaning, with examples such as “Wyth teres blewe and with a wounded herte” from Chaucer’s The Complaint of Mars. We tend to think of “the blues” as being American as apple pie, largely due to the American musical genre associated with the term. But like apple pie (a type of which was eaten in Chaucer’s day), the actual term doesn’t seem as uniquely American as its reputation suggests.