Was that a question? Belfast Upspeak 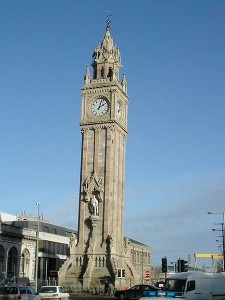 “Belfast upspeak” describes the upward inflection you find in Belfast English (and perhaps Northern Irish accents generally). In a nutshell, upspeak is the tendency to go up at the end of sentences? So everything sounds a bit like a question? At least to American ears?

Upspeak obviously isn’t confined to Belfast or Northern Ireland. It also seems common in Northern English and Scottish accents (Liverpool perhaps being the most famous example of this). And it has made headway in the US, as in the classic Valley Girl accent (“I was driving to the mall? To buy a bikini?”)*

But it’s in Ulster where upspeak strikes me as the frequent and systematic. In a study of the intonation of different accents, for example, the researchers found an upward inflection in Belfast of over 83% of declarative statements. In London, this percentage was exactly 0%!

To give you a sense of Belfast upspeak, check out this video**. It’s a long clip, so I’d recommend hopping around a bit to find various interviews (which start about a minute in):

The challenge for upspeak is comprehensibility. Belfast is already a notoriously tricky accent to parse thanks to its unusual system of allophones (the word “man” in popular Belfast nearly rhymes with General American “lawn;” the word “bag,” on the other hand, almost rhymes with GenAm “beg”). Upspeak no doubt furthers the potential for confusion.

What’s interesting is that, as per the study I linked to above, Belfast English relies on intonation very little to create meaning. Why, then, do some accents require different types of intonation to communicate? And why do others (e.g. Belfast) not require this?

*Important note: “upspeak” or “uptalk” is often used to refer to different types of intonational patterns. California uptalk is probably a very different animal than Belfast uptalk. I haven’t read anything about California uptalk, however, so I can’t offer specifics.
**I’m sorry to include a clip here that is all about the Troubles (there’s obviously more to Belfast than its recent history). However, this video provides one of the better collections of accent samples from the city you can find online.

Ben T. Smith launched his dialect fascination while working in theatre. He has worked as an actor, playwright, director, critic and dialect coach. Other passions include linguistics, urban development, philosophy and film.
View all posts by Ben →
This entry was posted in Irish English and tagged prosody. Bookmark the permalink.

23 Responses to Was that a question? Belfast Upspeak