The Accents of Transplants 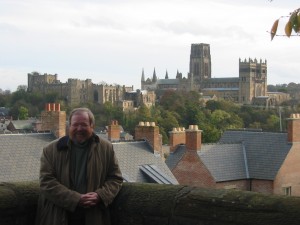 We’ve all met them.  The semi-British, the semi-American, the semi-Irish.  I speak, of course, of people who have left their home countries (or regions) for elsewhere, and whose original accents are starting to change.  Not only are their native regionalisms fading, in fact, but they are adopting the accent features of their new home country.

But not all transplants are the same.  Some people almost completely absorb the dialect of their new surroundings.  Others maintain the voice of their homeland till their dying days.  And contrary to common sense, this isn’t always a matter of how long you spend away from home.

To illustrate this point, let’s take a look at the accents of three people who have spent significant time away from their place of birth.  Appropriately for the subject of this site, I’ll start off with Bill Bryson, author and Iowa native, who has spent much of his adult life in England:

Bryon’s accent is pretty much what we would expect: still American, but marked by numerous English pronunciations and intonational patterns.  The man has spent decades in England, so this is unsurprising.

And yet it need not take decades for one’s original accent to be consumed by another.  For example, here is a young actress from Northern Ireland, Bronagh Waugh, who has spent less than a decade in England, but whose accent, with it’s glottal stops and loose diphthongs, is clearly starting to slant toward Estuary:

Of course, Waugh is an actress, and therefore in a profession where changing one’s accent is part of your job.  When I went to drama school (in America), I often encountered young actors who arrived with the thickest of Southern drawls, but spoke impeccable General American a mere two years later.  It comes with the territory.

But what about the converse?  People who live in a country for a very long time and yet curiously maintain much of their original accent?

A good example of that can be found in the accent of the brilliant singer Antony Hegarty, originally from Chichester, England, who now lives in the US:

At first listen, nothing sounds particularly odd here.  Hegarty sounds more or less like a Brit who has spent many years in America.

But I’ve failed to mention an important biographical detail:  Hegarty moved away from the UK when he was seven years old. In fact, most of his upbringing occurred in California.  And yet, despite the rhoticity of his accent, he still sounds quite British.

Hegarty is also transgendered and artistically tempermented, and has spoken in interviews of the intense isolation he felt growing up.  I don’t want to delve too deeply into the details of his personal life, but one might find an obvious correlation between the degree to which someone engages socially in their new surroundings and the degree to which their accent is altered.

This site is frequented by many transplants, people who’ve left their own countries for another or have left one region for another.  Has anybody found their own accent has changed significantly?  Or hasn’t?

Ben T. Smith launched his dialect fascination while working in theatre. He has worked as an actor, playwright, director, critic and dialect coach. Other passions include linguistics, urban development, philosophy and film.
View all posts by Ben →
This entry was posted in Accent Reduction. Bookmark the permalink.

62 Responses to The Accents of Transplants