Is the glottal stop bad for you? 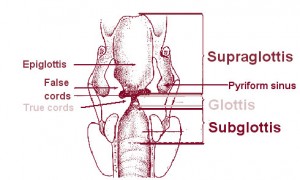 The larynx, with the glottis labelled (NCI)

You may not know what a glottal stop is, but you’ve probably heard one.

Already baffled? Let me explain. Ever talk to someone from London who pronounced butter something like “bu’uh?” With the t becoming a kind of “grunt?” The t sound for said Londoner was a glottal stop, a sound created by closing the glottis (a small opening in the larynx), then releasing it in a burst of air. This glottal t can be found in Cockney and many other UK accents such as those in Scotland, Manchester, and Bristol.

For a good example of this sound, take a look at the interview below, between Craig Ferguson (Scottish), and Russell Brand (from London).  Between the two of them, there’s a slew of glottal t‘s.

Or, really, you can search for any well known Cockney in YouTube and find many more.

Glottal stopping has even made inroads into America as well. In Central Connecticut, glottal t has become quite common. It seems to be spreading rapidly among younger people in that area. African American Vernacular English also features the glottal stop, albeit in a different set of environments.  So it’s a very common sound in various English accents.

In drama school, however, I was told that glottal stopping was bad bad bad. My voice and speech teacher warned of the dangers of glottal stopping. “It can shred your voice,” he said. “It’s the worst thing you can do to your vocal cords.” In fact, he rarely referred to it as a glottal stop, but rather applied the scarier-sounding term, Glottal Attack. Yikes!

And my voice and teach professor wasn’t alone among those in the voice and speech training community. Here is what renowned vocal coach Patsy Rodenburg has to say about the matter in her The Actor Speaks (emphasis mine):

A compromise is necessary if the accent has qualities in it that can damage the voice …  certain constrictions naturally present in some accents, could produce vocal abuse; glottal attack, for instance. You could speculate that native speakers of these accents have adapted sufficiently not to suffer this abuse.

Now I quite like Rodenburg, who I think is a brilliant teacher, but something is off about this statement. What is it about a glottal stop that is so “abusive?” And, frankly, begginning a sentence with “You could speculate…” is begging for some serious skepticism.

I think Rodenburg is trying to avoid an obvious objection, which is, if glottal stop is so bad for your voice, then how come so many languages and dialects have the glottal stop? The sound is constantly used in Arabic, yet you don’t hear of mass laryngitis sweeping across the Middle East. You don’t hear of a terrifying epidemic of hoarseness descending upon East London. What gives?

And this is where, methinks, the legacy of class rears its ugly head. Glottal stopping is associated with accents–Cockney, African American Vernacular English, the Bronx–that are stigmatized. I have no doubt that generations of diction coaches and voice professionals were taught that the sound was “ugly” for this very reason. And while few will admit as such, you can still find people, such as prescriptivist language blogger Benjamin Chew, who will openly state the thinking behind this:

If one wishes to be a speaker of elegant English, then one has to avoid glottal stops. The so-called language professionals may disagree and start waxing eloquent about linguistic diversity. I am all for healthy diversity, NOT unhealthy ones, not one that allows incorrect and poor English to run rampant.

One can almost smell the whiff of Twinings wafting from the Edwardian drawing room, can’t one?

But enough of this tangent. What I want to know is if there is any actual, scientific evidence that the glottal stop is bad for your voice. I won’t totally discount this theory, but I can’t help but feel like the evidence suggests the contrary. Does the glottal stop actually harm the voice? Or is this just a linguistic urban legend?

Ben T. Smith launched his dialect fascination while working in theatre. He has worked as an actor, playwright, director, critic and dialect coach. Other passions include linguistics, urban development, philosophy and film.
View all posts by Ben →
This entry was posted in English Phonetics and tagged celebrity accents, class and accent, Cockney, phonetics, stigmatized accents. Bookmark the permalink.

47 Responses to Is the glottal stop bad for you?