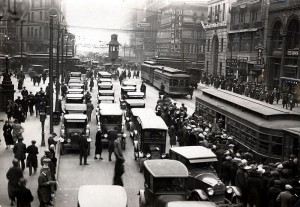 As per our recent discussion of Canadian accents, I’d like to delve into a question I often hear: how different is Canadian English from American English?

Not only are Buffalo accents and Canadian accents different, but they are actually shifting…in opposite directions.

Buffalo, along with other Northern US cities, features something called the Northern Cities Vowel Shift (NCVS). That means that a number of vowels have shifted from their “normal” positions in General American. The vowel in bet moves toward the vowel in but, bat moves toward bet, bot toward bat, bought toward bot, and but toward bought. It’s like a game of linguistic musical chairs!

This is why somebody from Buffalo can sound a bit “flat:” the word back can sound like “beh-uhck” and the word top often sounds like General American “tap.” It can be slightly jarring to outside listeners.

And it would sound to someone from Buffalo like:

I am exaggerating a bit here, but the point is clear: these two cities, despite being a mere two hours from each other, are remarkably different linguistically.

Why is it that there is such a large divide along the border between Canada and the US? I did a bit of research to see what I could come up with, and at first glance not much explained this conundrum.

As per William Labov in this article, the Northern Cities Vowel Shift looks to have started in upstate New York or thereabout around the late 19th-Century. But both Buffalo and Toronto experienced similar immigration patterns around the turn of the 20th Century. So there isn’t much difference between the two in that regard.

But it occurred to me that there might be a more grim explanation here. The major Eastern cities close to Canada–Detroit, Buffalo, Cleveland–simply never got a chance to attract any kind of cross-border cultural communication. Upon the collapse of industry in Detroit and Buffalo, there would have been little economic reason for Canadians to move there. Likewise, there would have been little reason for the largely working-class populations of those American cities to move to the very economically diverse Canadian cities of Windsor and Toronto. [UPDATE: After hearing from at least one native of Windsor, I’m not so sure this theory holds water for the Detroit-Windsor area.]

I wonder if this will change. I see no reason Detroit and Buffalo won’t become economically powerful cities in the next few decades. Weirder things have happened: In the 1970s, the city of Seattle was a working-class town with an unemployment rate of about 25%. In two decades it became one of the wealthiest and most economically diverse areas in North America. Go figure.

If these these other cities become powerful again, will the NCVS spread to Canada? Will Canadian English spead southward? Or will the two accents remain forever distinct?

Ben T. Smith launched his dialect fascination while working in theatre. He has worked as an actor, playwright, director, critic and dialect coach. Other passions include linguistics, urban development, philosophy and film.
View all posts by Ben →
This entry was posted in American English and tagged Canadian Accents, phonetics. Bookmark the permalink.