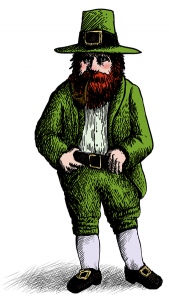 These assumptions are as mythical as leprechauns

As per yesterday’s post about the mythological Canadian aboot, I’ve thought of some other myths people harbor about accents and dialects of English. Here are a few common misconceptions:

Reality: That’s wishful thinking. As I’ve said before, Elizabethan English didn’t sound like contemporary British or American English. It sounded closer to an extremely strong Irish accent.  While it is true that the English spoken in Shakespeare’s day wouldn’t have sounded particularly English, that doesn’t mean it would have sounded American, either.

2.) Myth: American English is “colonizing” other accents of English.

Reality: Based on what evidence? There hasn’t been a large exodus of Americans to the UK, or Australia, or even Ireland. American English has become a bogeyman:  if the young people are speaking differently, it must be the influence of those rascally yanks! But I’ve never seen solid evidence that American English is spreading to other English-speaking countries.  This recent study only confirms how unfounded the notion is.

Reality: Not quite. When you hear “oy” (i.e. IPA ɔɪ)in words like “Irish” or “kite” or “ride,” you’re usually mishearing a diphthong which begins in the center of the mouth: IPA əɪ (or, roughly speaking, “uh-ee“). Because this diphthong doesn’t exist in most English accents, it is often misheard as “oy.”*  Hence people often think the Irish pronounce fly, tide and right as “floy,” “toyed” and “royt.”  It’s also worth mentioning that Irish is more commonly “Arish” in many parts of Ireland.

Reality: As with Irish/”Oirish” silliness above, this is actually a diphthong that starts in the center of the mouth; it’s most definitely not an “oy” sound.  Again, it’s more like IPA əɪ (that is, “uh-ee”).  If you hear “oy,” you’re just hearing the wrong sound.  It’s a moot point, anyway: this old-fashioned New York pronunciation is extremely rare these days.  It mostly died out in the 1960s or thereabouts.

Reality:  Just because America is a younger country doesn’t mean its dialects are younger.  In fact, many of the most widespread British accents feature newer linguistic innovations than their American counterparts. Between Estuary English and General American, for example, GenAm is by far the more conservative of the two accents.  American English preserves many old features–rhoticity and the short-a in bath, for example–that used to be more common in British English.

Reality: No seriously, I once read this absurd statement in a book written by a respected British vocal coach. The truth is, some Americans can tell the difference between British accents, and some can’t.  But there is no single “American Ear.”  Let’s not generalize!

Can you think of any more myths like these? There is so much misinformation floating around about the English language.  It boggles the mind!

*As a commenter notes below, there is a possible exception to this in working-class (or “popular”) Dublin accents, which may have a bit of lip-rounding in the first part of the diphthong.

Ben T. Smith launched his dialect fascination while working in theatre. He has worked as an actor, playwright, director, critic and dialect coach. Other passions include linguistics, urban development, philosophy and film.
View all posts by Ben →
This entry was posted in Miscellaneous Accents and Dialects and tagged Estuary English, General American English (GenAm), New York Accent, phonetics. Bookmark the permalink.