Good at Phonetics? It May be Genetics! 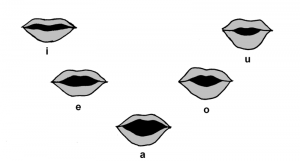 Any dialect coach will tell you that not everyone has a knack for picking up accents. Some people take to this kind of work immediately, while others struggle to recognize the most basic differences between accents. It’s a sad reality.

I have attributed this to external factors: where one grows up, media exposure, or one’s family. Regarding myself, I assumed my own phonetics obsession was due my parents (he is from the Upper Midwest, she from the American South), my hometown (in between several dialect areas), and my television habits (we only got PBS growing up, hence I watched a lot of BBC programming).

But then there’s this new study, which suggests that accent and phonetic proficiency may be genetic. Some people have brains that are capable of hearing phonetic differences between different speakers, while others are “deaf” in this regard. Quote the relevant article in Syfy News:

Using magnetic resonance imaging (MRI), the researchers compared the brain structures of seventeen phoneticians against sixteen healthy control volunteers and showed clear differences in the structure of key areas of the brain.

Maybe I shouldn’t be surprised, though. Thinking back, there is a bit of circumstantial evidence in my own life suggesting a correlation between genetics and phonetics.

My aunt, for example. She is an anthropologist who spent years immersed in the culture of the Tamils of Sri Lanka. I read a bit of her book a few years back, and remember finding something startling within the first few chapters. There was a detailed “pronunciation guide” for the Tamil language that looked remarkably similar to pronunciation guides I had made for English dialects. It looked, in short, like something I would create in my free time.

Then there’s my father, who works in the field of early childhood education. I only recently realized that phonetic analysis is an important part of his field. Indeed, he is one of the only people I know who has said, “Oh yeah, I’ve used that in the past,” when I’ve mentioned the International Phonetic Alphabet.

Beyond that, I’ve found there to be a slight preoccupation with accents and dialects among many members of my family. As I’ve mentioned on this blog before, I recall my grandmother discussing British accents with me when I was ten years old.

Strangely, though, part of me wishes phonetic proficiency wasn’t something innate. I truly hope we are all capable of learning languages and dialects, and recognizing different ways of speaking. I still hold on to that dream.

7 Responses to Good at Phonetics? It May be Genetics!