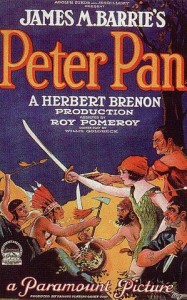 Slate ran a recent piece on the history of women playing Peter Pan onstage. This got me thinking about other theatrical or filmic traditions with regards to fictional characters. In particular, should we question why certain characters are played in particular accents? For instance:

I first experienced Peter Pan via the 1950s Mary Martin stage musical (produced for live television in 1960). I’ve long associated Pan with Martin’s homey Texas twang and, despite the character’s British provenance, have on some level never considered Pan anything other than American.

The strong American Pan tradition has a long history, actually, harking back to the earliest days of the story’s popularity: the first Broadway production of Barrie’s stage play starred Maude Adams, an actress from the then-frontier state of Utah. The tradition continues up to present day, of course, as the 2003 film featured young American actor Jeremy Sumpter in the role.

I find it difficult, in fact, to recall any notable British-accented Pans. And maybe that’s the way things should be. It’s hard not to see Neverland as a stand-in for America, or rather, a Victorian daydream of America in all its rugged beauty. (Note the presence of now-cringeworthy “Indians.”) So why wouldn’t Pan have an American accent?

HOW SOUTHERN WAS HUCKLEBERRY FINN?

Would Huckleberry Finn have had a Southern Twang? Or even much of one? Many film versions of the novel feature Hucks with Appalachian drawls, or something along those lines (I recall Mickey Rooney sounding downright Mississippian in the role). Still others (such as the adaptation starring Elijah Wood) feature Finns who sound more generally middle-American.

I’m of the opinion that the latter is more accurate. If Huck Finn supposedly resided in a fictionalized version of Mark Twain’s native Hannibal, Missouri, an especially thick twang might be inappropriate. Hannibal is a bit further north than one might expect (in modern times, the town is less than an hour from Iowa). Twain’s association with abolitionism and the often southern settings of his fiction belie the fact that he was more a Midwesterner than a Southerner.

That’s not to say that there would be no twanginess in Finn’s speech, just that it might be less marked as that of someone from, say, the Ozarks (Missouri is a big state). Of course, American speech has changed greatly since the 19th-Century, so it’s hard to say for sure.

Has there ever been a Scottish Sherlock Holmes? I’m curious why few actors have tipped his hat to the character’s Scottish creator, Arthur Conan Doyle. Yet Holmes is invariably English.

As far as I can tell, however, there is little in Doyle’s work suggesting where Holmes grew up, although this interesting Wikipedia subsection suggests he had some French ancestry. (If any diehard Holmes aficianadoes know otherwise, speak up!) Regardless, Holmes is quite fictional and could very well be played as Scottish or Irish without destroying the character’s integrity.

Yet Holmes has usually spoken Received Pronunciation or related accents, a trend which continues even today with the contemporary adaptation Sherlock. James Bond has had a bit of flexibility in this regard (the character’s most famous portrayer was a Scot); why not Holmes?

Ben T. Smith launched his dialect fascination while working in theatre. He has worked as an actor, playwright, director, critic and dialect coach. Other passions include linguistics, urban development, philosophy and film.
View all posts by Ben →
This entry was posted in Miscellaneous Accents and Dialects and tagged dialects in film. Bookmark the permalink.