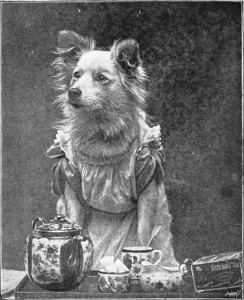 In Victorian uni slang, one word referred to both the above animal and caffeinated beverage.

I doubt one could pinpoint the moment English-speakers started using the derogatory sense of “bitch” (meaning, roughly, “ill-tempered woman”). Given our awful tendency toward misogynistic coinages, people probably called female humans “bitches” all of five minutes after they started using the word to reference female dogs.

I’m being slightly facetious. But turning female animal words into pejorative slurs is an unfortunate universal throughout English’s history: just look at such contemptuous and/or overtly sexual reworkings as “sow,” “cow,” “dam” (quite the insult in Shakespeare), and “vixen.”

And yet “bitch” has often been used in curiously non-misogynistic ways. In my own lifetime, I’ve heard of “to bitch” (meaning to complain), “bitchin’” (surfer-ish term meaning “awesome”), and inanimate “bitch” (as in “up in this bitch,” meaning “in this club/bar etc.”).

Such creative disarmaments are nothing new. Note how varied the definitions were in Joseph Wright’s The English Dialect Dictionary (published in 1898; format slightly altered for clarity):

1. A term applied, with no disrespectful meaning, to a woman or female animal.
north Yorkshire: That lass ez a soci bitch. That od bitch, shəs oləs breckin thru t’hedge. (W.H.)

Compounds: (i) Bitch-daughter, nightmare; (2) bitch-fox, a vixen; (3) bitch-nail, a holding-down nail for tram-plates, &c., having the point faced in the same line as the head, as distinguished from the dog-nail or dog (q. v.); (4) bitch-and-pups, a mason’s hammer, having on chisel inserted at each end of its face.
(i) w. Yorkshire: We connate shoe’s ridden by the bitch-doughter, ii, 291. (a) w. Somerset: We always say dog-fox and bitch-fox.

1. v. To spoil a piece of work.
Northumberland: Ye’ve bitched the hyel job. Cheshire: He was that stoopid he bitched the whole thing.

I can only imagine the absurdity of an effete young man asking his tea-time companion to “kindly pour us a spot of bitch.”

Joking aside, the first definition is particularly startling in that it implied “no disrespectful meaning.” Is it really possible that in certain rural English dialects a hundred years ago a man could call his wife a “bitch” the same way he might term her “kitten” or “pet?”

Now, obviously, some of the above terms are still derogatory in nature (I doubt Victorian Scotsmen took kindly to being called “bitch” in the local pub). But I can think of few other insults or curse words that have accrued so many diverse meanings. What is it about this particular slur that seems so especially versatile?