Dived vs. Dove in American Dialects 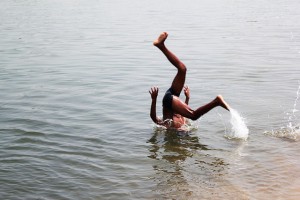 The past tense of “dive” exemplifies the quirky differences between American and British English. In Britain, this word is ostensibly “dived,” while Americans increasingly prefer “dove,” the latter likely formed via analogy from drive/drove (Insert joke about America’s auto-centric culture here).

However, it seems that the dived-dove distinction used to be something of a dialect marker in America. E. Bagby Atwood’s 1953 study A Survey of Verb Forms in the Eastern United States found that dove was chiefly Northeastern, used as the dominant form in New England, Upstate New York, and the Northeast corridor as far south as Wilmington, Delaware. In Central Pennsylvania, northeast Maryland, lowland areas of South Carolina, and a few other pockets, dived and dove were relatively interchangeable. Elsewhere in the Eastern US, presumably, dived was typical, along with more unusual forms like div and duv.*

So what’s happened since then? Well, I would hazard to guess that weird, wonderful old dialect forms like “div” and “duv” have waned significantly. But speaking purely from impression, it seems that “dove” has increased exponentially in the sixty years since Atwood’s study. It’s very difficult for me to say this with certainty, however, as we’re discussing an irregular past tense of a rarely used word for which I’ve found few straightforward studies.

So what kind of evidence can be found? Although I’ve often used Google’s NGram Viewer to examine unusual words, I have very little faith in their “American English Corpus.” So I attempted a wholly unscientific test which I call the “first 100 tweets” experiment, whereby one searches for a word on Twitter, looks up the first 100 tweets that use said word, then breaks down the tweets by nationality. After looking up 36 tweets, the ratio was a whopping 17 tweets in the UK using “dived” vs. only 2 tweets from America.

I unfortunately gave up at that point, when it became clear that data (so to speak) was going to be skewed by two important factors. First, the majority of tweets using “dived” involve Association Football (i.e. Soccer), and given the sport’s greater popularity in Britain than North America, it would likely distort things; it’s reasonable to think that, given that “dive” is a word with a particular meaning in the sport, American soccer fans might use “dived” as well.

So although the repeated assumption is that “dove” is the unmarked form in America, I can’t be 100% certain there aren’t still Americans who use “dived.” Yet if “dove” is now widespread in the US, why did “dived” so quickly recede? And why did this not occur in Britain?

*An important caveat: I have not read the study itself (it’s old and unavailable online except for the odd used copy sold on Amazon), only its description in R.L. Trask’s Historical Linguistics.

9 Responses to Dived vs. Dove in American Dialects