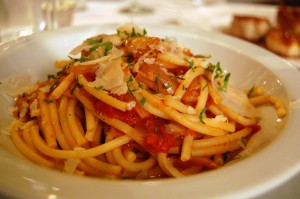 We Americans perhaps assume that the British pronounce ‘foreign’ words more inaccurately than we do. As evidence, one might cite such foreign loans as ‘Mario,’ ‘pasta,’ and ‘cliché!’ At first glance, it might look as if Americans stress the correct syllable or use the correct ‘ah’ sound.

But that’s not quite right.  In many cases where the British seem to pronounce foreign words the ‘wrong’ way, we delude ourselves in thinking we are any more correct. In the case of the previous paragraph, for instance, most Americans treat the ‘a‘ in ‘Mario’ and ‘pasta’ the same as the broad ‘ah’ in ‘father:’ hence ‘MAH-rio’ and ‘PAH-sta.’ We would probably deem this more ‘correct’ than the British pronunciation, which uses the ‘short a’ in words like ‘cat.’

But in the original Italian, the vowel in these words is typically centralized, neither back (as in the American pronunciation) nor front (as in the British pronunciation). So one could argue that American ‘pasta’ isn’t any more correct than British ‘pasta.’  It’s just a different interpretation.

The same is true of ‘French stress.’ Here in the States, we pat ourselves on the back about our ‘authentic’ pronunciation of French words like ‘cliché,’ ‘gourmet’ and ‘buffet’ with the ‘correct’ stress on the second syllable. We find it odd when we hear Britons put the emphasis at the beginning of these words.

Yet this is ignorant of the fact that French in fact has no lexical stress.  While stress (when it occurs) tends to fall on the last syllable of words, the American pronunciation isn’t technically more ‘correct’ than the British.  Our perception of proper French stress, as was the case with the Italian examples, doesn’t quite gel with reality.

Given, it’s likely Americans pronounce Spanish words closer to their native realizations: the language is a more ubiquitous part of our culture.  (It is indeed amusing to hear an Englishman pronounce ‘cojones’ as if it were a near-rhyme with ‘honest.’) But as our bizarre pronunciation of ‘lingerie’ indicates, we’re just as likely to mangle foreign pronunciations as our friends across the Atlantic.  We’re in no position to judge!

Ben T. Smith launched his dialect fascination while working in theatre. He has worked as an actor, playwright, director, critic and dialect coach. Other passions include linguistics, urban development, philosophy and film.
View all posts by Ben →
This entry was posted in English Phonetics. Bookmark the permalink.