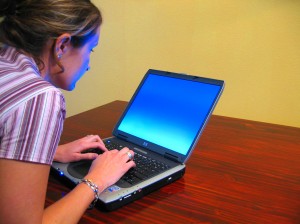 Since the dawn of the written word, great minds have noted the separation between spoken and written language. Yet with social media, we have perhaps bridged this gap. The conventions of texting, chatting, and emailing dictate a conversational tone, an off-the-cuff quality that imbues the conversation with personality. Naturally, then, one might wonder if online communication habits are influencing our spoken language.

For example, I’ve noticed a recent trend toward using the term ‘OMG‘ in face-to-face conversation. For those you haven’t been around teenagers for the past five years, ‘OMG’ is a simple acronym for ‘Oh my God‘ that has become a popular staple of electronic communication. For a while, I only heard ‘OMG’ used semi-facetiously, but now I’m not so sure.

In fact, we may underestimate the degree to which online lingo has infiltrated American spoken language. Amanda Pawelski, an English as a Second Language specialist, conducted an empirical study of how such language has changed our vocabulary. That paper, Using Internet Slang in Spoken Conversation: LOL!, is not the most academically rigorous (it amounts to a written survey whereby participants indicated which internet words they use in spoken conversation). But her results hint at some interesting trends in terms of how people use such words in everyday conversation.

For one thing, women seem to show more variety when it comes to spoken internet lingo than men. Both genders use terms like ‘bff‘ (‘Best Friends Forever’), the aforementioned ‘omg‘ (‘Oh my God’) and ‘lol‘ (‘Laughing out loud’), but women do so in greater numbers. Meanwhile, a small fraction of women use ‘wtf‘ (‘What the f***?’), ‘brb‘ (‘Be right back’) and ‘ttyl‘ (‘talk to you later’), where men reportedly never use these. Is this evidence of a gender gap opening in information-era dialects? Hardly, but it’s intriguing to wonder.

I remain a tad skeptical about the degree to which online writing will impact spoken language. Most of what we’re talking about here is slang, and slang rarely stands the test of time. More startling would be if online grammar begins to influence its spoken counterpart.  But thus far it’s hard to identify what ‘online grammar’ even is, much less how it might be sneaking into oral discourse.

Only time will tell.

Ben T. Smith launched his dialect fascination while working in theatre. He has worked as an actor, playwright, director, critic and dialect coach. Other passions include linguistics, urban development, philosophy and film.
View all posts by Ben →
This entry was posted in Uncategorized and tagged social media. Bookmark the permalink.