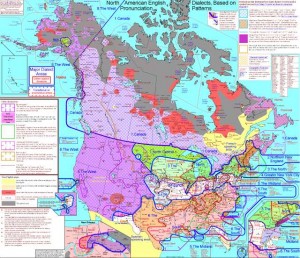 I have been studying dialects for years, and I have never come across anything as remarkable as Rick Aschmann’s American Dialect Map. For serious linguists, Aschmann’s research might seem wildly unscientific and cavalier. But for a hardcore dialect nerd like myself, his map is a godsend.

Because really, what Aschmann has done is what all of us language freaks have wanted to do, but been too lazy to do ourselves. He has compiled (and continues to compile) as many video clips of American English speakers as possible, and has fashioned a staggeringly detailed map based on his observations.

Before you indulge in this glorious resource, I want to offer a few caveats (all of which Aschmann is upfront up about):

1.) This map is not 100% scientific. That’s actually a selling point, in my opinion. Aschmann doesn’t busy himself with excessive background profiling. He makes judgements based on his own perceptions, and it allows him to move at a much faster pace than most academics.

2.) There are occasional inaccuracies. Aschmann openly admits that there are things that will sometimes be wrong on the map.   His project is a slow one, gradually illuminating America’s dialect divisions as they exist in the 21st Century.   Therefore, Aschmann makes educated guesses as he analyzes more and more audio.

3.) The map doesn’t get into specifics of phonology (the study of the sounds of language). If you want to know the precise difference between the way somebody from Texas and somebody from Louisiana say the word “goat,” this map ain’t for you. If you want to see how, generally speaking, people in a certain swath of the country tend to say the word “goat,” it’s a great tool.

4.) The map is pretty unwieldy at this point. The map isn’t a paragon of readability. One blog uncharitably referred to it as “the worl’d most unreadable map.” I think it has to be convoluted in order to be functional.

These (slight) liabilities aside, however, I would strongly recommend studying Aschmann’s map when you need to get a good perspective on the American dialect areas.

Ben T. Smith launched his dialect fascination while working in theatre. He has worked as an actor, playwright, director, critic and dialect coach. Other passions include linguistics, urban development, philosophy and film.
View all posts by Ben →
This entry was posted in American English and tagged dialect maps. Bookmark the permalink.